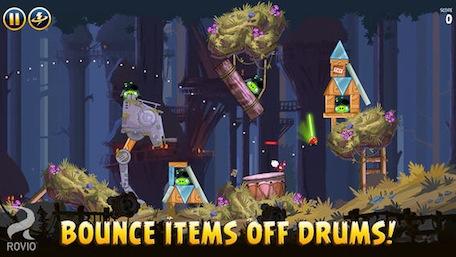 Rovio today has released an update to the wildly popular Angry Birds Star Wars game. The update adds a new locale -- the Forest Moon of Endor, as seen in Return of the Jedi.

The saga continues on the Moon of Endor with 30 furry new levels! Help the Rebel Birds disable the Death Star's deflector shield before it's too late. Take on Stormtroopers, Speeder Bikes and two-legged AT-ST walkers in the dense forests of Endor. And look out for those loveable fur balls -- the Ewoks!

Users can fight the Empire's evil forces on Endor with the help of Ewoks, by bouncing birds off Ewok drums, and, ultimately, by disabling the Death Star's deflector shield. The update also includes ToonsTV, the home of the Angry Birds cartoon series. What's especially nice about this update is the Endor levels are free instead of being a new in-app purchase.

In this article: angry birds, angry birds star wars, AngryBirds, AngryBirdsStarWars, endor, iOS, star wars, StarWars
All products recommended by Engadget are selected by our editorial team, independent of our parent company. Some of our stories include affiliate links. If you buy something through one of these links, we may earn an affiliate commission.
Share
Tweet
Share