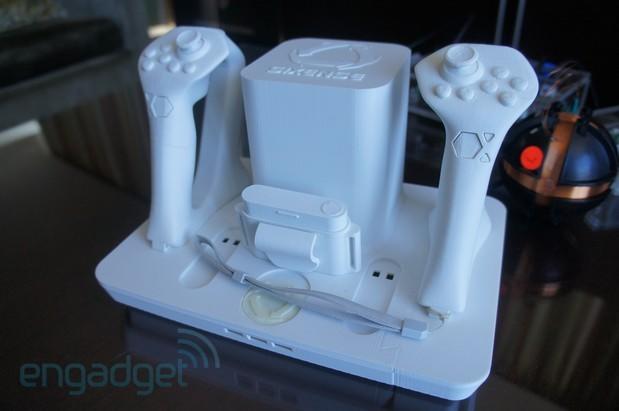 Sixense might not be a household name, but its electromagnetic motion sensing technology crops up in the darndest places. The 1:1 tracking technology is used in medical rehabilitation and Japanese arcade games, but it's most widely known as the wizardry behind the Razer Hydra motion controller. Now the company is gearing up to release a spiritual successor to the Hydra, the Sixense Stem System.

Like the Hydra, Stem offers six degrees of motion-tracking freedom, albeit without the wires or Razer branding. It isn't necessarily more accurate, but it is more comprehensive -- it's a modular system that offers up to five trackable modules, or "Stems," that attach to game controllers, VR headsets, accessories or even appendages. We caught up with Sixense president and CEO Amir Rubin to learn more about the Stem's Kickstarter launch and the company's first foray into the consumer product space.

"I come from a professional simulation background," Rubin told us. "Military and sports. I became an expert in motion tracking technologies." Before founding Sixense, Rubin helped create simulations that trained soldiers and shaped Calloway golf balls. It was when the Nintendo Wii's motion controller caught the public's attention that he started seriously thinking about the consumer space. "It wasn't just coming and going... Nintendo was breaking the ice and introducing motion tracking to the masses, opening it to a broader audience." Even so, the Wii's inertial sensors were too simplistic for Rubin, and he co-founded Sixense with an aim to do better. The company eventually settled on electromagnetic tracking -- an accurate, wireless technology that could keep track of orientation and position with a high degree of precision. Sixense licensed the technology out to a number of companies, eventually working with Razer to develop the Hydra game controller. "We didn't really want to be a product company, at least at the time. We planned on being a technology enabler," Rubin explained, noting that the Razer Hydra is carefully labeled as "powered by" Sixense. Leaving product development in the hands of another firm meant sacrifices, however -- the electromagnetic tracking technology was expensive, and Razer opted to create a wired controller in order to drive costs down. Rubin says that it was the right decision at the time, but the tethers limited the potential of the device.

Today, Rubin is inspired once more -- just as the success of the Wii encouraged him to found Sixense and build a better motion controller, the Oculus Rift has also influenced the direction of the company. "The Oculus Rift proved that our type of input devices, the six degrees of freedom and 1:1 motion tracking, is the best way to experience virtual reality. It's the most immersive and the most intuitive." Rubin paused and stated what he meant clearly: "We decided to become a product company because of the Oculus Rift."

Jumping from "technology enabler" to prototyping, manufacturing and marketing your own product isn't easy, however, and the company has taken to Kickstarter to help get the Stem System off the ground. Early backers can snag a Stem bundle with two tracking units for $149 -- the same price as the Razer Hydra that preceded it -- but after the first 200 units are spoken for, the lowest bid for hardware starts at $200. Folks looking for the full five tracker set will have to shell out $350.

It may not be cheap, but it does offer significant advantages over its predecessor. Rubin pulled out a clear-cased prototype to show us how the product has evolved, pointing out a large coiled orb that will eventually reside in the Stem's base station. Users of the Hydra will recognize it as the electromagnetic centerpiece that tracks the position of the controllers -- but the Stem's sphere was several magnitudes larger. Rubin explained that this increases the usable range of the system, which allows it to fit comfortably in a living room. The plexiglass prototype wasn't completely functional (it lacked buttons or full wireless connectivity), but we spent a few minutes comparing its 1:1 tracking to our experiences with the Razer Hydra. All said, it didn't lose track of our hands.

Sixense's crew pulled out a developer kit to give us a better idea of what the final product will be capable of. This unit was the simple black remote design we saw at CES 2010, but it had all the trappings of the final Stem product: wireless connectivity, impressive accuracy and multiple tracking points. The team affixed one to an Oculus Rift headset and plunged us in to its Sixense-modified Tuscany demo. Like the company's previous builds, the demo allowed us to use the Stem to pick up and throw objects, but the head tracking unit added a degree of immersion that the Rift can't offer on its own: positional head tracking. The extra sensor allowed us to physically peer around corners, moving the game's camera 1:1 with the position of the user's head. The entire experience became more immersive for this natural head tracking, and it didn't take long to see the device's potential for hardcore VR users. Still, the prototype wands were awkward, and difficult to affix to the headset -- an issue the dedicated clip accessories of the final unit ought to solve.

Sixense showed us one more demo before we were finished: an early build of motion controlled 3D modeling software. The team loaded up a model space ship and a turtle in the program, showing us how easy it was to create and manipulate objects in three dimensional space. Not too long afterward, Rubin whipped out a pair of identical 3D-printed models, explaining that Stem is more than just a gaming device: it can be a creative tool. The program is a separate project, Rubin told us, and will probably see its own Kickstarter launch sometime after the Stem comes to market. Interested in helping it along? Check out the Kickstarter link at the source to take a look.

In this article: electromagnetic, hands-on, motion control, MotionControl, razer hydra, RazerHydra, sixense, sixense stem, SixenseStem, stem, tracking, video
All products recommended by Engadget are selected by our editorial team, independent of our parent company. Some of our stories include affiliate links. If you buy something through one of these links, we may earn an affiliate commission.