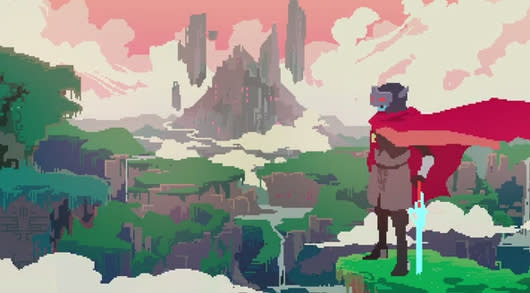 Hyper Light Drifter is set in a post-apocalyptic future in which players assume the role of a Drifter – a person who goes out and collects old technology and artifacts from the world-that-was. But in Hyper Light Drifter, the protagonist isn't an ordinary Drifter: He's suffering from an unknown illness and is on the hunt for a cure.

The Kickstarter post describes gameplay as a hybrid between The Legend of Zelda: A Link to the Past and Diablo, with "lightning fast combat, more mobility, an array of tactical options, more numerous and intelligent enemies, and a larger world with a twisted past to do it all in."

$27,000 will fund the game, while $35,000 will help expand the game world with two new areas and a New Game+ mode. $42,000 will net two more boss battles and improved cutscenes, and $64,000 will allow Preston to hire another animator and expand the game even more. $75,000 will provide a "fully realized soundtrack" by Disasterpiece and, if the Kickstarter campaign reaches $100,000, then co-op campaign and competitive modes will be instituted.

Right now the plan is to bring it to PC in mid-2014, but Preston "would love to expand to other platforms."
In this article: 2d, alex-preston, heart-machine, hyper-light-drifter, indie, kickstarter, pc, rpg
All products recommended by Engadget are selected by our editorial team, independent of our parent company. Some of our stories include affiliate links. If you buy something through one of these links, we may earn an affiliate commission.