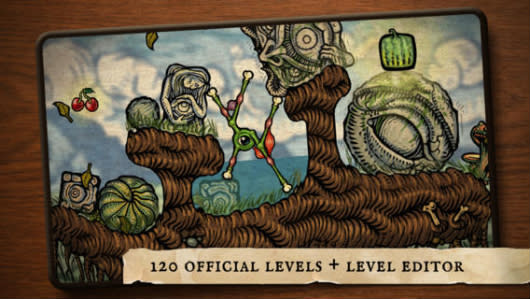 Incredipede has wobbled its way to mobile, available now for $4 on the App Store and Google Play. The mobile version of Incredipede retains most of the pretty wood-cut art and graphics of the PC version, with only a few effects disabled, and it has a few improvements for touchscreens.

The "what's under my fat finger window," as developer Colin Northway calls it, allows players to make detailed adjustments to Quozzle, the game's creature, even on tiny screens.

"Building creatures in Incredipede is especially visceral on touchscreens," Northway says. "Pulling legs out of Quozzle with your finger feels wet and slimy. It adds a whole new dimension to the game and has made the sandbox my favorite mode."

Colin Northway and his wife, Sarah Northway, famously travel the globe while developing their games, and Incredipede mobile is no different. They shipped this one from a tiny island in Panama, and they've also sent out games from Mexico, the Philippines and Costa Rica. See beautiful photos of the Northways' adventurous indie lives in their Flickr album.
In this article: android, colin-northway, incredipede, ios, ipad, iphone, mobile, northway-games, panama, sarah-northway
All products recommended by Engadget are selected by our editorial team, independent of our parent company. Some of our stories include affiliate links. If you buy something through one of these links, we may earn an affiliate commission.