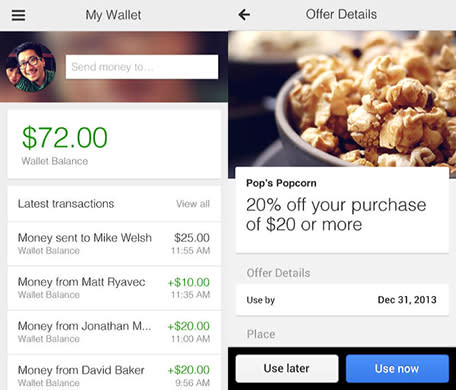 Whoa, this one caught our newsroom off-guard: Google has finally brought Google Wallet to iOS, with a version that came out for the iPhone today.

Along with the iOS release, Google has added the ability to send money from within the app. My husband, who uses Google Wallet on his Galaxy Nexus, pointed out that the interface has received an overhaul across the board with this release. You'll also be able to keep track of loyalty programs and receive offers targeted to Google Wallet users. About the only thing iOS users do not have is the ability to use tap-to-pay (obviously for NFC reasons).

Google Wallet is a free download and requires iOS 6 or above.

In this article: Google, Google Wallet, GoogleWallet, iPhone
All products recommended by Engadget are selected by our editorial team, independent of our parent company. Some of our stories include affiliate links. If you buy something through one of these links, we may earn an affiliate commission.
Share
Tweet
Share