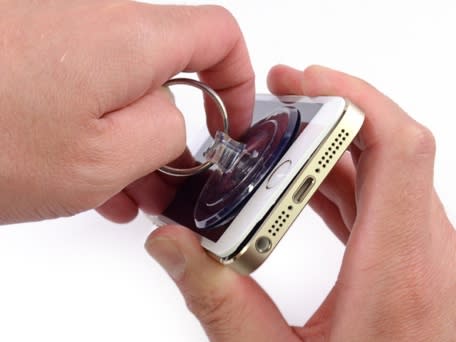 iFixit is quick to get their hands on the iPhone 5s and start to tear that beautiful piece of hardware down to its screws and rails. This time around, iFixit is not the first to crack open the iPhone 5s. Australian iPhone repair company iExperts can claim that honor as it already showcased the innards earlier today. iFixit, though, has a way with words, which makes the teardown as entertaining as it is informative.

Some highlights of the teardown include the confirmation of AuthenTec as the company behind the fingerprint sensor, which was expected since Apple acquired the biometric hardware company last year. The sensor uses a CMOS chip and requires 5 to ten images to create a complete profile of your fingerprint ridges. iFixit also notes that the display in the 5s should be familiar to everyone as it is "no bigger, better, or badder than the [iPhone] 5." In fact, it is the same 326 ppi Retina display assembly.

No big surprises yet, but the teardown is just getting started. Check back as we will update this post with additional details as they are uncovered by iFixit.

Update: iFixit is done and has given the iPhone 5s a 6 out of 10 for repairability. It gets a lower score for using pentalobe screws, a battery with a more sticky adhesive and an all-in-one front panel that includes the front glass, digitizer, and LCD. Other goodies include the potential identification of the camera module as a Sony component and the sighting of 1GB of RAM.

WIth some help from Chipworks, iFixit also confirmed the A7 processor is made by Samsung.

In this article: iFixit, iPhone 5s, Iphone5s, teardown
All products recommended by Engadget are selected by our editorial team, independent of our parent company. Some of our stories include affiliate links. If you buy something through one of these links, we may earn an affiliate commission.
Share
Tweet
Share