iPad Air quite popular in first weekend of sales

Fiksu: iOS 7 adoption rate at 58 percent after one week 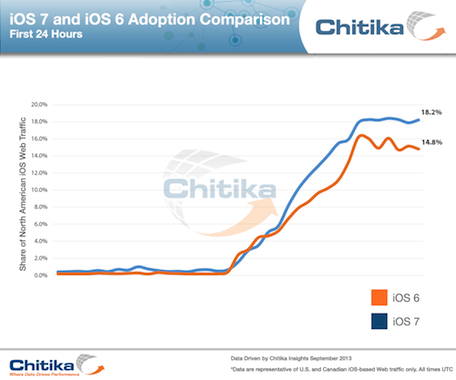 If it seemed like everyone on planet Earth was trying to install iOS 7 at the same you were, well, you're probably not wrong in that assumption. Information from Chitika Insights and others who have been following the action of the past 24 hours shows that anywhere from 18.2 percent (Chitika) to 36.10 percent (Mixpanel at 10:30 AM PT, see figure below) of all iOS devices are now running Apple's latest mobile OS. Why the difference in the numbers? Well, it probably has to do with the methodologies used by the two companies. A Mixpanel spokesperson responded to this question as follows:

The data in the iOS 7 adoption report on Mixpanel Trends is based on an aggregated set of the more than 15 billion actions analyzed by Mixpanel each month. The report shows the share of total activity on devices running a version of iOS at a given time, not on unique devices. In Mixpanel, an action is defined by our customers and can be anything from logging in to an app to making a purchase or finishing a level in a game.

I'm not familiar with their (Ed: Chitika's) methodology, so it's hard for me to speculate on why they are so different. But part of the answer could be the time at which the data was pulled. The data in our iOS 7 adoption report is updating in real time, so that 36 percent is as of 10 AM PT. Our chart shows we saw 18 percent adoption at around 5 PM PT last night.

Also, here are some other points you might find interesting:

While we can't speak to Mixpanel's methodology, here's how we tabulate our statistics for the iOS 7 study:

We examine traffic across 300,000 different websites within our ad network ---these range from several sites in the Alexa Top 10 to smaller blogs. Additionally, our network of sites comprises a wide variety of verticals (e.g., automotive, photography, retail, etc.) For this particular study, we examined tens of millions of online ad impressions to tabulate our results. An important distinction is that we examine web browsing activity, rather than in-app activity.

In comparison to the Android operating system, where only 45 percent of all devices are currently running Android 4.3 "Jelly Bean" -- an operating system that was released in July 2012 -- the adoption rate for iOS 7 is incredible, even when Chitika's lower numbers are used for comparison.

In this article: adoption rate, AdoptionRate, Android, Chitika, iOS, iOS 6, ios 7, Ios7, Mixpanel, SciTech
All products recommended by Engadget are selected by our editorial team, independent of our parent company. Some of our stories include affiliate links. If you buy something through one of these links, we may earn an affiliate commission.