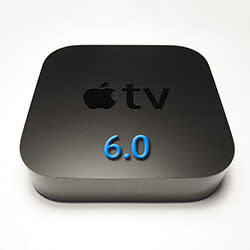 It's been expected, but now an AppleTV update has arrived. The new 6.0 firmware adds support for iTunes Radio and purchases from the iTunes Music Store. In addition, updating adds podcast syncing, viewing of shared photo streams and AirPlay from iCloud. This update gets the AppleTV feature parity with iOS 7.

The new firmware also upgrades the AirPlay wireless streaming feature, so you can now play iTunes store-purchased content on other AppleTVs.

The download and install was very slow for me today, likely because Apple servers are slammed with all the other updates people are doing with new iPhones and in upgrading devices to iOS 7.

Apple has been enhancing the AppleTV software recently, and has added new apps for Vevo, The Weather Channel, Disney Channel and other content sources.

To get the update on your AppleTV, go to Settings > General and select "Update Software." This update works on the second- and third-generation Apple TVs.

In this article: AirPlay, Apple, Apple TV, AppleTV6.0, AppleTVupdate, Disney Channel, ICloud, iOS, ITunes Store, SciTech, The Weather Channel, Vevo
All products recommended by Engadget are selected by our editorial team, independent of our parent company. Some of our stories include affiliate links. If you buy something through one of these links, we may earn an affiliate commission.
Share
Tweet
Share