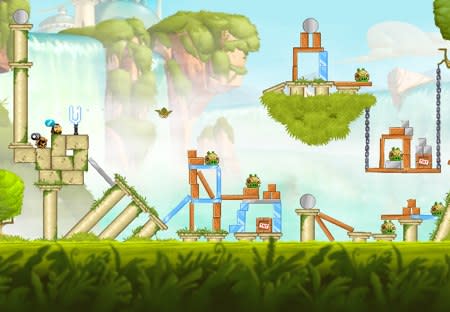 The original Angry Birds Star Wars title was a blissful marriage of two iconic IPs, and as a dedicated Angry Birds fan, it remains one of my favorite games in the series. With Angry Birds Star Wars II, Rovio tries to recapture that same magic, and while the core mechanics remain largely unchanged, your enjoyment of the game will depend on how well you stomach in-app purchases.

When the original Angry Birds Star Wars was released, its in-app purchase options were limited to a few bonus training missions. Over time, a plethora of microtransaction options were added, giving the experience a bit of a cheap feel. That same emphasis on purchasable upgrades permeates Angry Birds Star Wars II from the very start, and a pulsing shopping cart at the top of the game screen is a constant reminder that the game would love to sell you some overpowered goodies.

The gameplay itself is the same time-tested Angry Birds excellence we've come to expect, with a ton of fantastic destruction puzzles, great music and ridiculously gorgeous background art. Rovio really gives the Star Wars characters and locations a ton of flair and attention to detail. If you're a Star Wars fan, there's a lot to love here.

The airborne assassins at your disposal range from Jedi-themed birds that wield lightsabers to newcomers like a Yoda character that spins and bounces off of everything in sight. You can also play as the Dark Side (or "Pork Side") characters for the first time, which adds an evil angle to the mayhem. Every level is fun to play, and the boss levels can seriously test your skills, which is a pleasant change from many of the so-called "casual" hits on the App Store.

You can absolutely best every level in the game without spending anything on the bonus characters -- and I'd argue that doing so is more challenging, as well as more fun. However, with the game constantly reminding you that there are purchasable bonus characters available, it can be easy to feel like you're missing out on something by not throwing down the extra cash. It's not a deal breaker, but it definitely adds an unwelcome layer of annoyance to the experience.

If you love Angry Birds, this one is an easy recommendation, and with so many levels and new characters to play, Angry Birds Star Wars II offers a lot of content for just US$0.99. If you've not played an Angry Birds game before, or if you have, but you skipped the first Star Wars iteration, I'd suggest going back and checking out the original crossover title before agreeing to take on its bigger, darker brother.