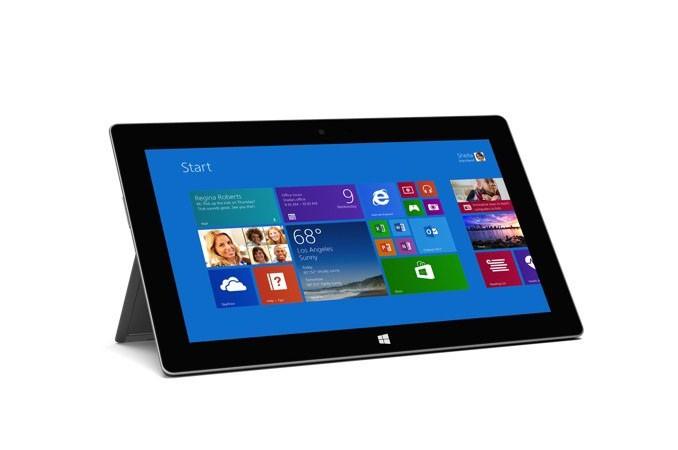 As promised, Microsoft has just revealed the Surface 2 here at its Surface-themed press event. Whereas the new Surface Pro 2 makes subtle changes to the original Pro, the Surface 2 is being billed as a revamped version of the Surface RT. As rumored, it moves up to a higher-res 1080p ClearType display -- the same one you'll find on the new Surface Pro 2. Performance-wise, the tablet now has a Tegra 4 chip (versus Tegra 3 in the last generation). Microsoft also says it's doubled the BUS speed for the WiFi and the memory, and the CPU speed has increased "dramatically" as well. Additionally, there's now a USB 3.0 port on board, a step up from the USB 2.0 connection used on the original. All told, says Microsoft, the new model should run three to four times as fast as its predecessor, and the battery life should be 25 percent longer too (up to 10 hours of video playback).

As for the design, this looks similar to last year's RT, at least from a few feet away, but it's thinner (8.9mm), lighter (676g) and built from two pieces of magnesium, not three. And, of course, it sports the same two-stage kickstand as the new Surface Pro 2, which should make it easier to balance in your lap. As you'd expect, it also works with the new Touch Cover 2, which Microsoft also announced today. Oh, and it's available in white now too; not just black. Moving on, Microsoft also added a third-inch camera sensor to the front of the product to help manage the light in webcam videos, especially those recorded in dim light. Speaking of video chats, Surface owners will enjoy a year of free international calling and Skype hotspot access. Not enough freebies for you? Microsoft's also throwing in 200GB of SkyDrive storage, free for two years. In an unusual twist, Microsoft also revealed the price (the company kept us in suspense last time). The Surface 2 it will start at $449, with 32GB and 64GB storage options. You can place pre-orders tomorrow morning, September 24th, beginning at 8AM ET. Then, on October 22nd, they'll ship in 21 markets. And whoa, Nelly: every person at this press event will receive a Surface 2 in the mail in the coming weeks. Aren't you sad you're not here with us? Anyway, you'll need to wait over a month to get hands-on, but we'll be getting our first look in just a few moments once Microsoft wraps up its keynote and opens up the demo area. Stay tuned!