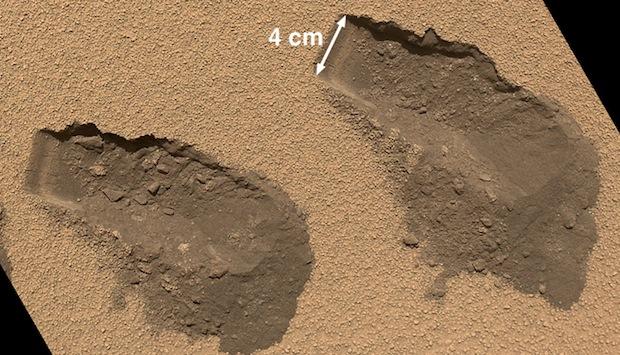 We already knew Mars was blanketed in ancient riverbeds, which points to the existence of water in the distant past. What we didn't know, however, is that H2O exists on Mars in the here and now -- albeit embedded in Martian soil. A paper recently published in the journal Science revealed that as much as two percent of dirt from the Red Planet contains the precious liquid. The Curiosity rover gathered samples of the sand from the "Rocknest" area near the Gale Crater back in August of 2012 and delivered it to the Sample Analysis at Mars (SAM) instrument inside its belly. After heating the sample to around 835 Celsius, SAM was able to detect a surprising amount of carbonate materials, which are formed in the presence of water.

Laurie Leshin, dean of science at Rensselaer Polytechnic Institute and the study's lead author said the findings are conclusive: "If you took about a cubic foot of the dirt and heated it up, you'd get a couple of pints of water out of that -- a couple of water bottles' worth that you would take to the gym." Another SAM discovery is a mineral called perchlorate that could interfere with thyroid functions if ingested. Still, if we could work around that, the findings could prove tremendously useful for future Mars explorers. "When we send people," Leshin said in the paper, "they could scoop up the soil anywhere on the surface, heat it just a bit, and obtain water." We're likely years away from having fishing expeditions in Mars, of course, but this does soften the blow about the possible lack of life.

In this article: curiosity, laurieleshin, mars, nasa, rover, sam, soil, TL16MRSAQUA, water
All products recommended by Engadget are selected by our editorial team, independent of our parent company. Some of our stories include affiliate links. If you buy something through one of these links, we may earn an affiliate commission.