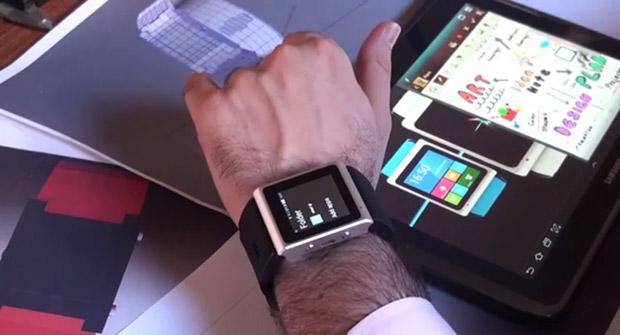 Smartwatches sure are multiplying faster than rabbits. One of the newest devices hoping to make it to market is the A.I Watch: a companion gadget that's also a standalone Android phone, similar to a Chinese creation we saw in August. According to its developers, you can use the A.I Watch to make and accept calls -- à la Hot Watch -- even if it's not connected to a phone via Bluetooth. That's because it has its own SIM card slot and supports 850/900/1800/1900 MHz GSM bands, as well as 3G. They also claim that its unspecified 1.2GHz dual-core processor is powerful enough for downloading apps from Google Play, loading Maps for navigation, streaming videos and accessing social networks, among others. The A.I Watch runs Android 4.0.4, has 4GB of storage, 512MB of RAM, a 1.54-inch 240 x 240 touchscreen display, a 500mAh battery and a 5-megapixel camera.

If the device ever makes it to retail, it'll sell for $279 each, which is around the price of Samsung's Galaxy Gear. Right now, however, the device's fate hangs in the balance as its creators work to raise $100,000 on Indiegogo to cover mass production costs. Check out videos of the A.I Watch in action after the break, and enjoy a chuckle over one of its watchfaces that looks undeniably Metro-esque.

Update (09/30/2013): So, a lot of you have pointed out that the A.I watch is a dead-ringer for Vapirius' AX2 smartwatch. We don't know for sure if A.I watch is merely a copy, but we've reached out to its developers for comment -- we'll update this post once we hear back. Meanwhile, the AX2 is available in Europe for €299 ($400), so you can probably bypass this Indiegogo campaign and go straight to Vapirius' website... although seeing as A.I has only raised a miserable $3,677 of its $100,000 goal, it seems like plenty of you weren't that excited to begin with.

Update #2 (09/30/2013): Thanks to a helpful tipster, we've tracked the likely source of the A.I. smartwatch to a Chinese manufacturer known as Shenzhen Hop Industrial, which markets the device as the EC309 (shown after the break). These watches are sold individually at $229, or as little as $158 with bulk discounts. Needless to say, if you'd like to buy an A.I. smartwatch today -- and for a lot less -- you might look to an importer for the hookup. [Thanks, Lokifish Marz]

In this article: a.iwatch, android, mobilepostcross, SmartWatch, video
All products recommended by Engadget are selected by our editorial team, independent of our parent company. Some of our stories include affiliate links. If you buy something through one of these links, we may earn an affiliate commission.