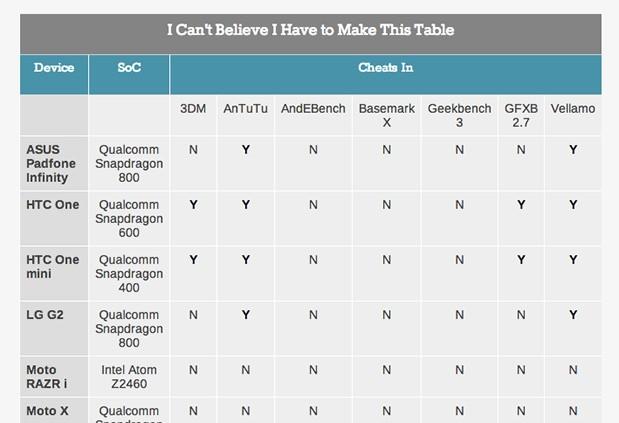 Samsung has come under fire this week for allegedly inflating the benchmark scores for the Galaxy Note 3 among other Android devices, but -- shocker -- the company is not alone in enhancing scores. AnandTech just published a report that shows ASUS, HTC and other companies using the same "benchmark detect" function to artificially bump up the numbers. According to the site, virtually all OEMs run a CPU optimization on at least one of their devices, save for Apple, Google's Nexus 4 and Nexus 7 and Motorola's latest crop of phones. Dishonesty aside, though, what's the big to-do about these inflated scores? AnandTech found that companies notched less than a 10-percent performance boost in AnTuTu and Vellamo. And when's the last time you based your smartphone purchase on benchmark scores alone, anyway?

In this article: asus, benchmark, galaxy note 3, GalaxyNote3, google, htc, mobilepostcross, samsung
All products recommended by Engadget are selected by our editorial team, independent of our parent company. Some of our stories include affiliate links. If you buy something through one of these links, we may earn an affiliate commission.