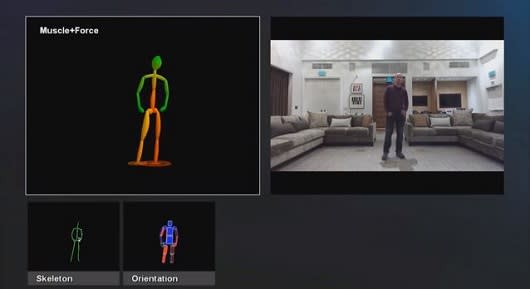 A recent Microsoft blog explored the technology behind the Xbox One's Kinect hardware and how "time-of-flight" is expected to be a significant improvement on the Xbox 360's version of Kinect. The tech "emits light signals and then measures how long it takes them to return," which Microsoft said needs to be "accurate to 1/10,000,000,000 of a second."

The blog included two videos, the first demonstrating how the Xbox One's Kinect uses time-of-flight to track the 3D orientation of players as well as calculate force exerted by different muscles. The second video, seen after the break, shows off the camera's infrared sensors and ability to pick up movement while players are in the dark.

Microsoft's blog described the development process behind the next-gen camera and how assistants from Microsoft Research had to overcome issues such as motion blur. Sunil Acharya, senior director of engineering for Microsoft's Architecture and Silicon Management team, said that "the time-of-flight camera uses global shutter, which has helped reduce motion blur significantly - from 65 milliseconds in the original Kinect to fewer than 14 milliseconds now."
In this article: kinect, microsoft, microsoft-research, silicon-valley, sunil-acharya, tech, tech-demo, xbox, xbox-one, xbox-one-kinect
All products recommended by Engadget are selected by our editorial team, independent of our parent company. Some of our stories include affiliate links. If you buy something through one of these links, we may earn an affiliate commission.