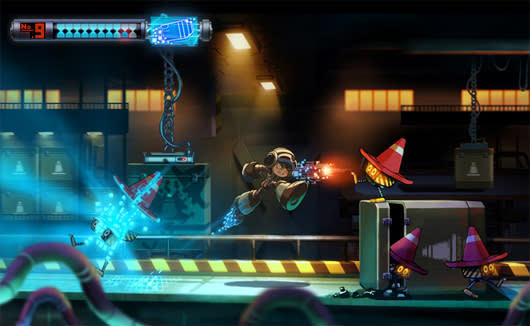 The Crowdfund Bookie crunches data from select successful Kickstarter and Indiegogo campaigns that ended during the week and produces pretty charts for you to look at.
The power of Keiji Inafune's name couldn't be more evident than in this highly-profitable week in crowdfunding, which covers the Kickstarter projects for Mighty No. 9, Shantae: Half-Genie Hero, Sunless Sea, DCS WWII: Europe 1944, Neverending Nightmares, Penguemic, Mysterious Cities of Gold, Hot Tin Roof: The Cat That Wore A Fedora, Data Hacker: Corruption and Neo-Victorian Skirmish Squad.

Mighty No. 9, the action platformer project from the Mega Man creator earned the most money this week ($3,845,170) and had the highest number of backers (67,226). LearnDistrict Inc's educational game Penguemic: Word Domination had the highest average pledge per person of the group ($160.81).

Head past the break to see the week's results and our set of fancy charts.