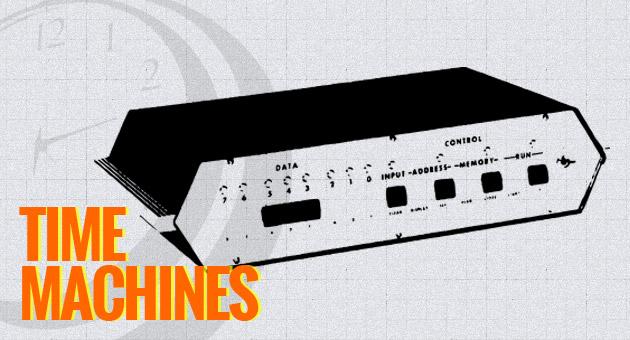 This digital device was released in 1971, just prior to the announcement of the first commercially available microprocessor. It offered a personal computing experience at a relatively affordable price and, in 1986, it was selected as the winner in the Computer Museum's "Earliest PC Contest." Head past the break for more on this piece of computing history.

Like many innovative technological devices, the Kenbak-1 digital computer was born in a California garage. Unfortunately, that set of circumstances doesn't always guarantee success in the marketplace. John Blankenbaker devised the Kenbak-1 after many years of casual contemplation; it was to be a training tool, offering the enjoyment of programming at a reasonably accessible price of $750. However, being the first personal computer on the scene also placed it ahead of the essential technological developments and hordes of enthusiasts that helped launch the home-computing revolution years later.

Blankenbaker's mind was set in motion as a college freshman in 1949, after reading an inspirational article about giant, vacuum tube-studded computers and their binary language. After graduation, he began working at Hughes Aircraft Company, where he was struck by the high cost of computer components. In Blankenbaker's own autobiographical account, he recalls, "The department head was fond of saying that every flipflop [sic] (a bitstable device capable of storing a 1 or a 0) added $500 to the price of the computer."

Around 1970, Blankenbaker found himself unemployed and set up the Kenbak Corporation to build an affordable personal computer.

He conceived a design that would maximize the capability of a single flip-flop by adding enough RAM and even drafted an article on the subject in 1958 entitled "Logically microprogrammed computers." His solution was to make a computer "which could store the description of another computer in the memory and then to evaluate what the target machine would do when faced with a program," bypassing the need for extensive hardware and keeping the baseline cost close to $500 per unit.

Around 1970, Blankenbaker found himself unemployed and set up the Kenbak Corporation to build an affordable personal computer. The device's name was culled from his own, a string of characters in the middle of his surname, followed by a "1" in hopes of future iterations. He had altruistic goals for the project, looking to offer a device that was educational and satisfying for the user to program. The Kenbak-1's shell and components were mostly off-the-shelf parts, with just the front and rear panel requiring custom design. Inside was a logic board with 132 integrated circuits, as well as two MOS shift registers for the serial memory. The Kenbak-1 was limited to just 256 bytes of RAM due to its size and technical limitations. Blankenbaker even managed to max out the memory with just a tic-tac-toe game, not even leaving enough space to show the winner.

The Kenbak Corporation focused sales on professionals and schools, pitching the computer as a training device. In September of 1971, with sales starting to trickle in, he placed an ad in Scientific American and moved the company to a sufficiently swankier rented office space. However, by the time 1973 rolled around, Blankenbaker had to move back to the garage and soon shuttered the company entirely. In total, only about 40 units of the Kenbak-1 were sold, many going to C.T.I. Educational Products, where it was rebranded as the H-5050, which still garnered few sales.

Blankenbaker even managed to max out the memory with just a tic-tac-toe game, not even leaving enough space to show the winner.

Other companies soon followed, with the French-made Micral computer from 1973 earning the title of the first commercial computer based on the microprocessor. This single-chip CPU allowed future computers to function at a higher level than the Kenbak-1, benefiting from software and even more compact form factors.

Two years later, Ed Roberts joined the computing game, offering a $395 do-it-yourself kit called the Altair 8800. With declining hardware costs enabling its low price and the benefits of Intel's recent 8080 microprocessor, it went on to become a huge success. The use of machine language and a switch panel for I/O were still a bit cumbersome, so it's no surprise that Roberts accepted an offer from Bill Gates and Paul Allen when they proposed an interpreter written in BASIC. That software was called Altair BASIC and it marked the beginning of the young duo's new company, Micro-soft. By 1976, personal computing had gained another successful entrepreneurial team in Steve Wozniak and Steve Jobs. While John Blankenbaker and the Kenbak-1 may not have become a household name, they certainly earned their place in personal computing's history.

In this article: av, gadgetry, gadgets, gear, john blankenbaker, JohnBlankenbaker, kenbak-1, personal computing, personalcomputing, time machines, TimeMachines
All products recommended by Engadget are selected by our editorial team, independent of our parent company. Some of our stories include affiliate links. If you buy something through one of these links, we may earn an affiliate commission.