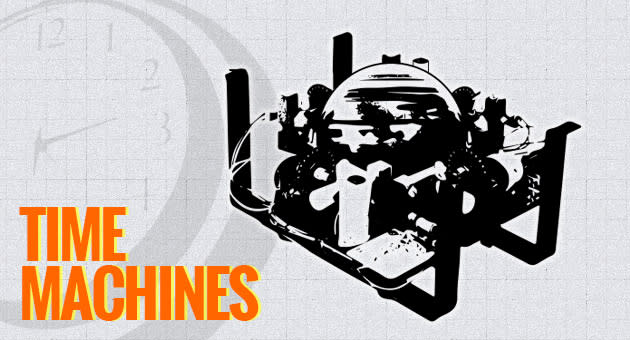 If you've ever played the arcade version of Missile Command or used a mechanical mouse, then you've sampled technology that originated in a secret Canadian military research project back in the '50s. The device was a key component in a radar display interface that allowed operators to maneuver an on-screen cursor with speed and accuracy to identify targets. Roll on past the break for the full story behind this device.

The tale of the mouse often begins with Douglas Engelbart's "Mother of All Demos," but its predecessor, the trackball, actually appeared over a decade before. It was an orb-based controller developed for the Royal Canadian Navy's (RCN) experimental radar-tracking program called DATAR (Digital Automated Tracking and Resolving) and represented what many believe to be the first example of using electronic computers in this type of military application. DATAR faced political and financial stumbling blocks and suffered a catastrophic accident, resulting in a short research and development lifespan, but the technological innovations it spawned have informed a multitude of military and commercial applications ever since.

In the late 1940s, the Cold War was just heating up and Canada, with its limited defense assets and exposed coastlines, was compelled to develop new technology for its military. It decided to focus on early detection systems rather than armaments and leveraged a "sharing" relationship with the US and UK for the heavy lifting in that latter arena.

Their first mock-up used a five-pin bowling ball that spun on "air bearings."

Ferranti Ltd., a UK-based electronics company, answered Canada's call for help in developing the DATAR system, and with assistance from Canada's finest engineers, they began to make a plan. Ferranti's core UK team arrived in Canada in 1949 and alongside some talented local university graduates like Tom Cranston and Fred Longstaff, they set to work on the task. DATAR would be an inter-ship electronic communications system with the ability to pinpoint the location of vessels using radar and sonar, analyze the incoming data and transmit results to the entire fleet.

One of the project's hurdles was finding a way for radar operators to track targets on their displays and extract useful information about heading, speed, altitude and depth. In early 1952, Cranston and Longstaff came up with the idea for a device that used a ball as the main interface, with operators spinning the ball by hand to control the X and Y position of an on-screen cursor. Their first mock-up used a five-pin bowling ball -- only about four to five inches in diameter -- that spun on "air bearings." This trackball gave operators a fast and accurate method of moving a cursor to follow and identify target coordinates.

Real-world tests began on Lake Ontario in 1953, with DATAR systems loaded aboard a pair of minesweeper ships and one shore-based station.

Real-world tests began on Lake Ontario in 1953, with DATAR systems loaded aboard a pair of minesweeper ships and one shore-based station. Soon after, however, one of the ships suffered a major fire, resulting in the loss of almost half of the project's hardware. Without further funding or support, this catastrophe meant certain death for the program.

In 1957, the US Navy Electronics Laboratory (NEL) began work on a similar project, basing much of the design on the RCN's experiences with DATAR. As the project began, NEL engineers delivered a specifications manual that identified the "trackball" as the preferred controller for their system. The NEL's studies showed that current light-pen technology was far too cumbersome and that joysticks, while offering quick tracking, were not as capable at accurate positioning as the trackball.

Over the decades, development in GUI tools became increasingly important as computer systems developed. Engelbart's "mouse," although using individual wheels for tracking X and Y positions instead of a ball, showed that the core concepts had a lot in common. Versions of the trackball and the mouse began to proliferate, and sometimes merge, with one of the most common mutations being the mechanical mouse, which houses a ball inside of a standard mouse-type shell. The trackball also became a popular arcade game controller, used in games like Centipede, Marble Madness and even a variety of bowling games, which seem to honor the core element of the 1953 DATAR trackball prototype.

In this article: datar, DATAR trackball, DatarTrackball, douglas engelbart, DouglasEngelbart, fred longstaff, FredLongstaff, gadgetry, gadgets, gear, personal computing, personalcomputing, royal canadian navy, RoyalCanadianNavy, time machines, TimeMachines, tom cranston, TomCranston, trackball
All products recommended by Engadget are selected by our editorial team, independent of our parent company. Some of our stories include affiliate links. If you buy something through one of these links, we may earn an affiliate commission.