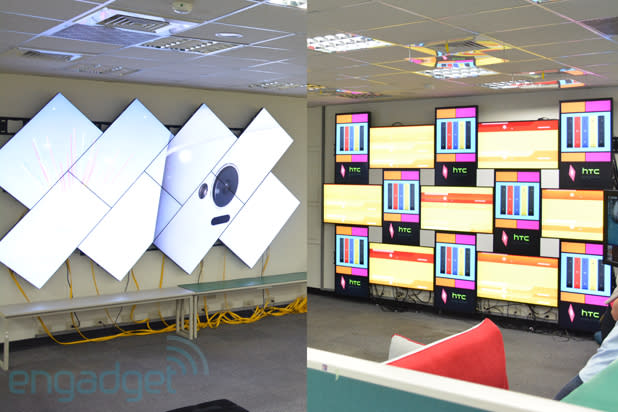 VIA Technologies isn't a name that often pops up on Engadget, but its latest video wall signage solution deserves a shout-out. The idea's simple: you can output a 4K x 2K footage to an array of thin-bezel 1080p LCDs -- powered by S3 Graphics cards -- arranged in any way you like, including the orientation of each monitor. While the Taiwanese company wasn't keen to show off too much of its backend system, we were given a glimpse of its S3 MagicView software, which lets you easily fit one or multiple clips across a carefully aligned canvas corresponding to the LCDs. Check out our video after the break and you'll get the idea.

(HTC and VIA are both chaired by Cher Wang, so it's no surprise to see the latter displaying HTC ads for its signage demo. Wang's husband, Wen-Chi Chen, is the President and CEO of VIA.)

A complete system similar to the above two -- either with eight 46-inch panels or fifteen 42-inch panels -- could cost between NT$3 million (about US$102,000) to NT$4 million (US$136,000), and it's also available for rental. VIA said it's targeting the likes of churches, schools, cinemas and shops with its range of signage solutions, some of which can be powered by the company's Android PCs to reduce costs.

We also left the demo room with some interesting local nugget: if you see green packs of "Kuai Kuai" snacks placed on top of servers, don't move them! Apparently it's a Taiwanese tradition amongst technicians to ensure their machines behave, as implied by the 45-year-old snack's name, which means "well-behaved." VIA's staff in the room gasped when this ignorant author picked up one of the packs; so kids, you've been warned.

In this article: display, featured, features, hands-on, s3, s3graphics, s3magicview, signage, taiwan, via, viatechnologies, video, videowall, visualized
All products recommended by Engadget are selected by our editorial team, independent of our parent company. Some of our stories include affiliate links. If you buy something through one of these links, we may earn an affiliate commission.