Netflix actually made a Netflix and Chill button, and you can too

Makers are getting their own social network

LittleBits' Arduino module puts the focus on programming, not wiring 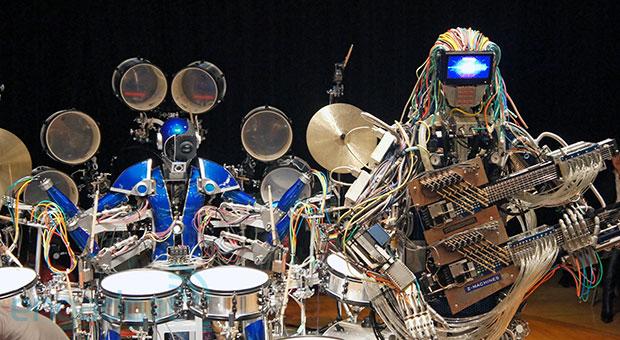 Once they've finished hunting us down, it looks like the machines will be able to put on a good show to celebrate. The all-robot band, Z-Machines, have been making erratic appearances across Japan since early Summer, and Maker Faire Tokyo seemed like the most appropriate place to show off some actuated ax-grinding. They were without the third member, the keyboard-playing, laser-shooting Cosmos, but that didn't detract from a spectacle that drew in university students, older professor-types and stroller-pushing families alike. The live performance lasted roughly ten minutes, prefaced by a quick intro and explanation from the team that built them, but two songs was more than enough to make the crowd cheer and whoop: the robots will be repeating the show six times each day of the Maker Faire, but it's not as if they're going to tire. The guitarist (Mach) wields two guitars, while we counted just over 20 drumsticks connected to Ashura, with plenty of pneumatic piping on both robots to ensure they connect with their respective instruments.

One of the biggest challenges, we're told, was ensuring that program timing included the movement between hitting a beat and hitting the subsequent one. If Ashura had just hit the snare, for example, then the drumstick would be in a different starting place. Alongside pre-programmed music, both robots could be controlled independently and we got to briefly steer the guitarist robot with both a wired-up guitar and keyboard. After the break, alongside Z-Machine's warm-up set, we've added a full-length collaboration between the 'bot band and Squarepusher, a combination that makes a whole lot of sense. 15
In this article: makerfaire, makerfairetokyo, robot, RobotBand, zima, zmachines
All products recommended by Engadget are selected by our editorial team, independent of our parent company. Some of our stories include affiliate links. If you buy something through one of these links, we may earn an affiliate commission.