BlinkScan is a flexible, fast and high-fidelity scanning solution 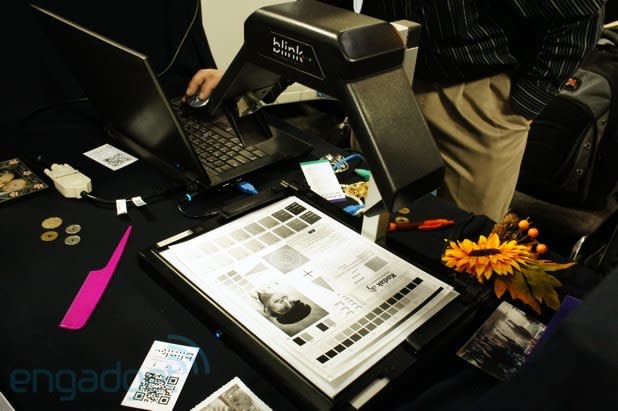 Your scanner is stupid. You might not know that, but it is. Thankfully, Expand NY Insert Coin semi-finalist BlinkScan is here to give you what you never knew you needed. It's a device that scans images, documents or even objects like many other scanners out there, but unlike those dumb machines, BlinkScan tailors its output. Instead of producing a single image with everything lumped together, it crops out the individual items scanned (so that the background is completely eliminated), straightens the resulting images and exports them as separate files to your photo editing software of choice -- all in about three seconds. BlinkScan also delivers super-high-quality pictures thanks to its unique image-capture method, which the company calls "perfect color capture." To get such fidelity, the device takes three separate 10-megapixel monochromatic images (red, blue and green) and combines them into a 36-bit, 30-megapixel image. All that post-processing's accomplished by the company's proprietary software running on a dual-core TI chip that has one ARM core and one DSP core, and exports it as a compressed 8-bit image. When asked why it exports a noisier file than is captured, the company told us that when doing customer research, it found that customers wanted smaller image files and were willing to make the small sacrifice in quality. That said, company founder and CEO Don Skaggs informed us that his company's technology is perfectly capable of outputting raw files, but he hasn't found demand sufficient enough yet to merit making the necessary software changes. Speaking of customer research, you may be wondering just who, exactly, will be buying BlinkScan. Turns out, interest is high amongst archivists and curators of museums, as the scanner's ability to scan multiple documents and objects at once while producing separate, high-quality files for each is a huge timesaver. Graphic artists, coin merchants and stamp collectors are also interested in the device for similar reasons. Oddly enough, Blink has also found that many funeral homes are interested in the speed of the technology, as there is a very short window of time to digitize photos of the deceased and prepare them for display at the service.

For now, the letter-sized BlinkScan you see above is the only size slated to be produced, but the company assured us that its technology is "very scalable," so customized versions are possible. "We can go down to the size of a pea" if requested, according to Skaggs.

Right now, the BlinkScan is ready to go into mass production, and the company will be launching on Kickstarter in the next few weeks to fund manufacturing. Once complete, the BlinkScan will be primarily aimed at businesses and retail for around $1,000, with a consumer version potentially coming later.

In this article: blinkscan, expand, expandnyc2013, hands-on, InsertCoin, InsertCoinNewChallengers, scanner
All products recommended by Engadget are selected by our editorial team, independent of our parent company. Some of our stories include affiliate links. If you buy something through one of these links, we may earn an affiliate commission.