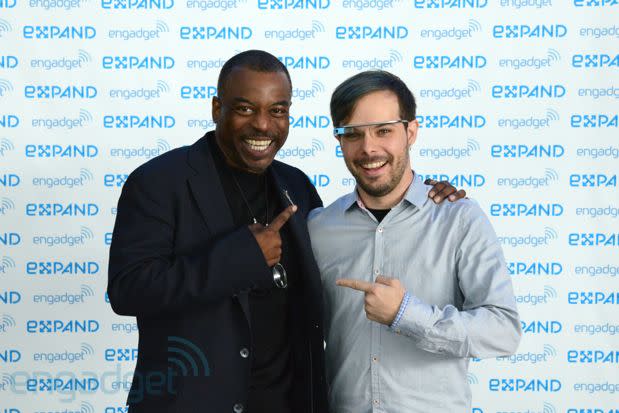 "It disturbed me. I was skeptical... [and] I'm a person that's very open to technology."

That's the reaction LeVar Burton, the man best known from Reading Rainbow and Star Trek: The Next Generation, first had when encountering Google Glass backstage at Engadget Expand. Burton, a self-described edutainment pioneer, acknowledges the disruptive power new technologies can have on media and culture -- after all, he did help transform television into a worthy educational tool/babysitter with his PBS program. But even with that storied success, and his company's current inroads into digital with an iPad Reading Rainbow application, Burton still had a "knee-jerk" response when confronted with Glass. Although his celebrity status and the resulting paranoia could have something to do with it.

Speaking on-stage about the experience, Burton explained his thought process: "A person in my position has cameras pointed at him all the time. My first question to [Timothy Jordan] was, 'Am I being recorded?' If I had this sort of knee-jerk bias, [then] we have a huge education problem in terms of getting people to adapt to next-generation technology."

Does that mean we'll never see some sort of Reading Rainbow app developed for Glass? It's quite the opposite, actually. Though Burton never stated any explicit plans to develop for the platform, he did highlight the need to embrace these emerging technologies as a means of exploring new ideas and pushing boundaries -- presumably, in the education space. To do this, Burton believes that he and the millennial generation, specifically those who grew up with his show, are "responsible for the production of our own content" and to move past an obsession with banal status updates on social networks.

Citing the Reading Rainbow app as an example, something Burton refers to as the "Netflix for kids," he explained that he "wanted to prove two things: that the brand had relevance and kids could benefit from this tech." And with kids consuming nearly 72,000 books and 50,000 videos per week on that app, Burton has solid proof that technology doesn't have to just distract; it can educate, as well.

Slight bouts of technophobia aside, Burton's stance on the intersection of tech and education is unambiguous and something he plainly laid out for attendees: "The future of kid's education is technology and how we apply [that] technology to learning ... The next five to 10 years are crucial in how we raise the next generation of Americans."

Whether those kids take a look at books on an iPad, smartwatch or wearable heads-up display, Burton will be there to push society forward... and, perhaps, into a world more like Geordi's.

In this article: expandnyc2013, google, Google Glass, GoogleGlass, levar burton, LevarBurton, reading rainbow, ReadingRainbow, video
All products recommended by Engadget are selected by our editorial team, independent of our parent company. Some of our stories include affiliate links. If you buy something through one of these links, we may earn an affiliate commission.