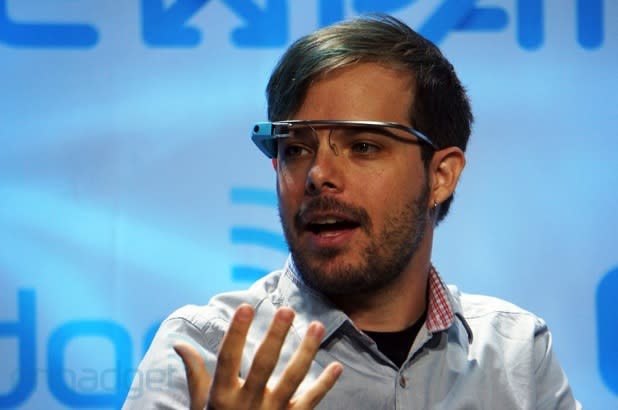 Many wonder whether Google Glass has legs as a technology. Will we still be using it (and talking about it) years from now? If you ask Google's Senior Developer Advocate Timothy Jordan, absolutely. Speaking at Expand in New York, he described the wearable eyepiece as a fundamental shift in user interface concepts that will remain exciting for a long time to come. There has even been a surprise or two for Google itself, he says.

Jordan noted that many interface advances are little more than incremental updates to archaic ideas. Take the QWERTY keyboard, for example: It may get modern improvements like backlighting, but it's still the same input method that a newspaper editor designed to prevent clogs in typewriters. The Google evangelist sees Glass as a complete break from that past. It proves that computing interfaces can be simple and non-intrusive; you just have to speak a command to take a picture, and the display all but vanishes from your view until it's truly necessary.

While this concept appears to be a novelty that might lose its momentum, Jordan doesn't see the enthusiasm for Glass disappearing anytime soon. Google itself has been rolling out frequent updates that expand what's possible on a base level, and increasing support for third-party software (Glassware, as Google calls it) is opening up new possibilities. The developer evangelist argued that Glass produces killer categories, not just killer apps. To him, Coupons.com's KitchMe serves as proof. The app lets you keep recipes close at hand not only while you're grocery shopping, but also while you're cooking -- you don't have to dirty up your gadgets. That kind of always-available companion app just wasn't practical before.

Google has also learned quite a bit about its own product through the Explorer Edition program, Jordan said. The company was well aware of the need to support prescription glasses, but it wasn't until the Explorer launch that the company realized just how much demand there was for eyewear compatibility. Customization has also taken off through personalized skins.

Despite all this optimism, Jordan is still (relatively) pragmatic when discussing Glass' role in the technology world. He sees the wearable as an assistant that makes sense within the rapidly diversifying range of devices that we use every day. You'd likely only use a laptop to write a book, for instance. However, it may ultimately change how we use technology. Jordan observed that he uses both Glass and his smartphone less than he did in the past -- Glass makes him that much more efficient at accomplishing common tasks.

In this article: expandnyc, expandnyc2013, glass, glassware, google, googleglass, timothyjordan, wearable
All products recommended by Engadget are selected by our editorial team, independent of our parent company. Some of our stories include affiliate links. If you buy something through one of these links, we may earn an affiliate commission.