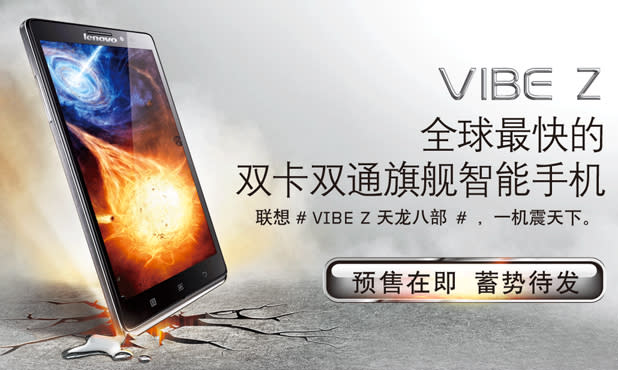 Lenovo's been using a lot of MediaTek chipsets for its phones of late, but don't worry, it hasn't forgotten to share some love with Qualcomm. What we have here is the Vibe Z aka K910, which is a Snapdragon 800 cousin of the MT6589T-powered Vibe X, but with the same anti-fingerprint finish on the back. By comparison, the former is bigger and 1mm thicker (at 7.9mm), but it does pack a 5.5-inch full HD IPS display, a dual-SIM tray, a 13-megapixel f/1.8 main camera (with dual-LED flash) and a 5-megapixel wide-angle front imager. For the Sony IMX135-powered main camera, Lenovo says it's capable of shooting up to 10 stills per half second, plus its proprietary low-light algorithm apparently produces notably brighter pictures with effective noise reduction. We'll believe it when we see it.

While no battery size is mentioned just yet, Lenovo claims a lab-tested standby time of 278.5 hours for the WCDMA + GSM model. There will also be a CDMA2000 + GSM model for China Telecom users, as well as an LTE + GSM flavor for the international market. Interestingly, the company is offering an S View Cover-like flip case for the Vibe Z, but it comes with the added trackpad that lets you receive or reject calls in the usual spot, instead of having to poke inside the window. We doubt Samsung is going to be happy about this, though LG, Pantech and some others have borrowed this idea before.

Lenovo China's website says it will soon be taking pre-orders for its latest Android device, but you'll have to stay tuned for the pricing and availability for the rest of the world. 4
In this article: android, china, dual-sim, IMX135, k910, lenovo, mobilepostcross, phone, snapdragon800, vibez
All products recommended by Engadget are selected by our editorial team, independent of our parent company. Some of our stories include affiliate links. If you buy something through one of these links, we may earn an affiliate commission.