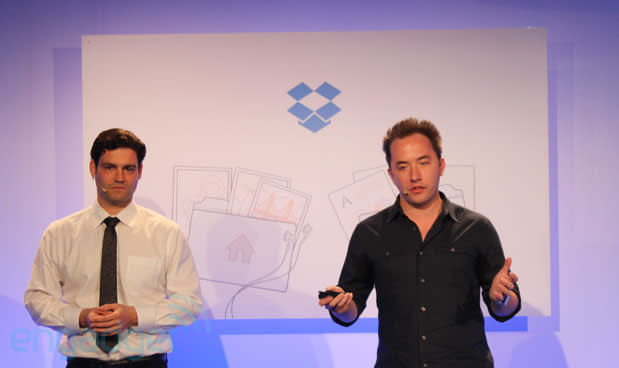 It's a double-edged sword: your work is using one of your favorite services to manage files and projects, but now you have to juggle two logins to maintain balance between your personal and work accounts. This frustrating practice may be "business as usual," according to Dropbox CEO Drew Houston, but the truth is, he finds it a little silly. "People think there's this consumer version of Dropbox, and there's this enterprising version of Dropbox and we think that's ridiculous. There should only be one" Soon, there will be.

Speaking at the company's headquarters today, Houston announced that Dropbox for Business will now allow users to link their personal accounts, giving them seamless, simultaneous access to both their self-managed Dropbox and their corporate managed files. Ross Piper, VP of Enterprise Strategy, told Engadget that the feature grew as a necessity of growth. "We noticed we had 200 million users and 4 million businesses, but no elegant solution to linking the two that gave IT the control it needs without imposing on personal data." Dropbox's account linking hopes to solve this problem, giving companies full control over their own accounts, while allowing users private access to their personal files from the same login. The company says it's "like having your house keys and work keycard on the same keychain," but Piper says it feels more like just having two folders on your computer desktop. The new system will roll out to call customers early next year, but users who want to try account linking right now can sign up for the beta on Dropbox's website.

In this article: dropbox
All products recommended by Engadget are selected by our editorial team, independent of our parent company. Some of our stories include affiliate links. If you buy something through one of these links, we may earn an affiliate commission.