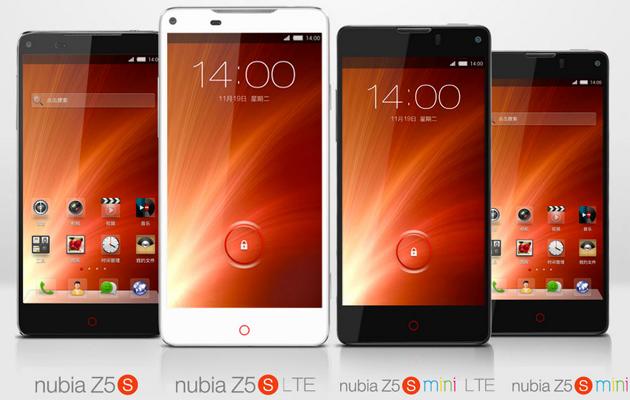 It was only just over a month ago when ZTE's premium brand Nubia made its debut launch in the US, and today the company's already launching follow-up models in China. Starting with the Z5S, this is essentially the Z5 (or simply the 5 in the US) packed with some new goodies: a 2.3GHz Snapdragon 800 SoC, a 5-megapixel front camera, a dedicated camera button, 4K video capture, a multi-purpose infrared remote feature and rare support for all three 3G networks in China (China Mobile's TD-SCDMA, China Telecom's CDMA2000 and China Unicom's WCDMA). There's also a Z5S LTE that supports both FD-LTE Band 3 plus China's TD-LTE Band 38/40. Additionally, its main camera is enhanced with an f/2.0 aperture with optical image stabilization, and voice calls should be clearer on the other end courtesy of the three microphones for noise cancellation. This model starts from CN¥3,456 (about US$570) with 32GB storage, but if you don't mind using 3G only then the Z5S starts from just CN¥1,999 (about US$330) for the 16GB version.

Interestingly, the Z5S costs -- maybe intentionally -- the same as the similarly specced Xiaomi MI3, except Nubia is already taking orders on November 26th via JD.com (delivery to within China only, sorry!), whereas Xiaomi is still waiting for the slightly faster Snapdragon 800 variant before it can ship the WCDMA and CDMA2000 flavors of the phone later this year (the MI3 is currently only available with Tegra 4 plus TD-SCDMA radio). And of course, it's just a matter of time before Nubia brings these over to the US market.

Last but not least, you have the 4.7-inch Z5S mini and Z5S mini LTE. Unlike their larger siblings, these two are more similar to their predecessor in terms of specs. These include the 2.67mm bezel, microSD expansion, 13MP/5MP camera combo, swappable back cover and the support of the three 3G networks in China. The main differences are the newer 1.7GHz Snapdragon 600 chip, a new IGZO 720p display, a smaller 2,000mAh battery (instead of 2,300mAh) and a slightly different appearance -- the main camera is now off-center, for instance.

There's no word on which LTE bands the Z5S mini LTE supports just yet, but interested folks should start saving up CN¥2,345 (about US$390) for the 32GB model. As for the budget conscious lot, the 3G-only Z5S mini starts from just CN¥1,499 (about US$250) with 16GB storage, and it's also available for purchase in China starting on November 26th. Again, stay tuned for US availability.

In this article: android, china, fd-lte, lte, mobilepostcross, nubia, phone, snapdragon800, td-lte, z5s, z5slte, z5smini, z5sminilte, zte
All products recommended by Engadget are selected by our editorial team, independent of our parent company. Some of our stories include affiliate links. If you buy something through one of these links, we may earn an affiliate commission.