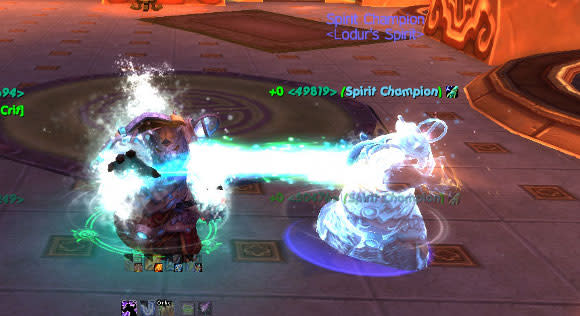 BlizzCon has come and gone and it has left us, as it usually does, with a very small glimpse of what is yet to come. It seems like every expansion restoraiton gets shifted one direction or another. Whether it is focus on stats or our role in the healing team of a raid. No matter what way you look at it, excitement or fear, change is coming.

While the expansion, Warlords of Draenor, has just been announced and system changes are still being developed but it is never too early to start taking a look into what we can start to expect. Whether it's from gear, to stats, to spells and ability well... I'd rather start taking a gander now and not be blindsided later. That said, right now it's all speculation, since the game isn't even in beta yet.

Itemization Changes, and Farewell to Reforging

These changes were among some of the ones that intrigued me the most. It represents quite a large shift away from the things we've grown accustomed to over the many years of playing this game. Items are going to have fewer gem sockets on them. There will be no more socket bonuses, no more meta gems, and the gem sockets won't count towards the item budget for stats. This, overall, is very good news. It means that we'll get more of the stats we need without having to worry about spending gold or time on gems to actually get even the base stats we need. There will also be fewer items which can accept enchants, but apparently there is going to be more choice for those items. I like the sound of that considering how limited enchants are currently for say a cloak or gloves. These changes are important because Reforging is going away. This come from a point where the Developers at Blizzard stated that they felt there is too much modification and that every time you get a new piece of gear it required too much of your time to adjust all of the stats. To be fair, that is a very accurate assessment. We spend so much time making adjustments, or re-gem, sometimes even between boss fights. I know I've had more than one raid held up so that someone could go reforge and re-gem to make sure their stats are prefect.

If that wasn't enough, there are even more changes for armor on the way. There will be new tertiary stats being introduced, so far we've seen mention of Lifesteal, Avoidance, Sturdiness, Speed and Cleave. So far only sturdiness, which will be an item that doesn't lose durability, is of any interest to healers. I'm confident that there will be something geared towards healers, or that something like cleave may wind up giving cleave healing or some such. Probably the best change, is that there will be no difference between healing or DPS gear. Rather, the gear will just adjust it's primary stat to match whatever your spec is at the time. This also applied to tier gear, where the set bonus will change to match whatever you spec is currently set to. This does not extend to jewelry, cloaks, trinkets and weapons.

So what does it ultimately mean for restoration shaman? Well, for one it means less time fiddling with gear, or worrying about specific upgrades all of the time. Though I'm sure it will still play a part in the normal cycle of things, it's going to be much less important and much less time consuming. All of these changes are a move into a better quality of life. Greater gear availability, though yes you will have to share those pieces with other mail wearers, but you'll have more opportunities to get gear quicker. You'll spend less time fiddling with stat weights and gems, while getting options for enchanting. You won't have to worry about reforging, and the idea of only having to carry around one gear set for all of our in game needs is a good one. It will all be for the best, as long as everything is balanced between the healing classes in WoD, but this has some very solid potential, and we should be very excited about this. All of this represents the possibility of a level playing field, or at the very least must more time for them to invest into making healing between the classes much more balanced. That is my hope at least.

Among the plethora of changes to gear, itemization and gear enhancement, we got our first look at the potential level 100 talents. The cool thing about what they showed, at least with this first pass, is that every talent at level 100 has something to offer to restoration.

Rainstorm gives us Condensation Totem, which takes 25% of our overhealing and grants is as spell power towards the next Healing Wave, Healing Surge, Greater Healing Wave, Chain Heal and Riptide. This has huge potential to add to our healing throughput depending on the cooldown for the totem, and if the additional spellpower is continuously applied for the duration of the totem between casts. Storm Elemental Totem gives us something that I've asked for a few times before, an air elemental totem. For restoration, this guy is going to heal allies for 100% of whatever damage it deals, split up among the viable targets. The trick here is going to be how this heal actually reacts. Is it a smart heal like Chain Heal, Healing Tide Totem and Healing Rain? Is it a blanket heal that will just passively heal everyone for small amounts while it's active? We have a lot yet to know about this talent. Reach of the Elements grants High Tide, which allows Chain Heal to extend it's bounce to all targets affected by Riptide. Considering what you can do with Glyph of Riptide to blanket your group with Riptide, this also has some huge potential. You can cover a lot of people before that 18 second duration on Riptide drops.

This is the first time I think I can say I'm excited at the potential for every single one of these talents. Depending on the particulars about them, they could be quite useful. What's more important, beyond just the abilities of the talents and what they do, these are very thoughtful to the current position we find ourselves in as healers. Each talent is either very shaman in it's approach, such as giving a new totem to utilize, but they also interact with our other abilities and even our issues in some cool ways. Overhealing is an issue that has plagued shaman since the days of The Burning Crusade. So much of our tool kit just has overhealing built into it by it's very nature. There's not a whole lot we can do about it sometimes, but now there is a talent that addresses that. Chain Heal, an iconic spell, has been getting turbo charged as of late and it has certainly had a positive impact on our healing. There's now a talent that takes that further, and gives us control over how that CH flows through the raid. This is already shaping up to be a potentially stellar expansion for restoration shaman in particular, and it is going to be something I eagerly watch throughout the development process. Things will certainly change, lets hope they keep shifting in a positive direction. So what was your favorite bit of shaman news from BlizzCon?

Totem Talk: Restoration lends you advice on healing groups, DK tanks and heroics and mana concerns in today's endgame -- or take a break and look back at the rise of the resto shaman. Happy healing, and may your mana be plentiful!
In this article: featured, guide-to-shamans, healing gear, resto, restoration, restoration-shaman, restoration-shaman-column, restoration-shaman-totem-talk, shaman-guide, shaman-healing, shaman-info, shaman-restoration-column, shaman-talents, warlords-of-draenor, wow-shaman, wow-shaman-info
All products recommended by Engadget are selected by our editorial team, independent of our parent company. Some of our stories include affiliate links. If you buy something through one of these links, we may earn an affiliate commission.