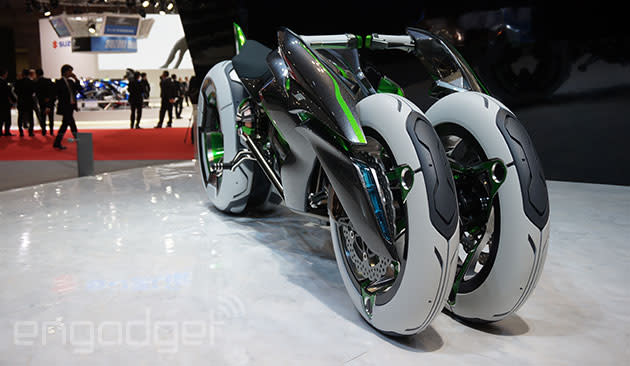 Does Kawasaki's new electric cycle have two, three wheels or four? Well, it depends. According to the conceptual sketches and a terse explanatory panel, the "J vehicle" concept EV can switch between a lie-down two-wheel Akira / Tron-baiting cycle and a four three-wheel drive mode, with the latter designated as "comfort" mode. The model, revealed at this year's Tokyo Motor Show, is apparently powered by Kawasaki's biggest onboard battery pack, the Gigacell, although (any other) details aren't forthcoming. That's probably because it's from the future and is tearing the space-time continuum apart.

(Update: According to those aforementioned concept images, only the front wheels separate outward in comfort mode, turning it into a three-wheeled vehicle, not a quad-bike. We apologize for the error.) 9
In this article: akira, cycle, FourWheeler, hands-on, kawasaki, quadbike, tokyomotorshow, tokyomotorshow2013, tron
All products recommended by Engadget are selected by our editorial team, independent of our parent company. Some of our stories include affiliate links. If you buy something through one of these links, we may earn an affiliate commission.