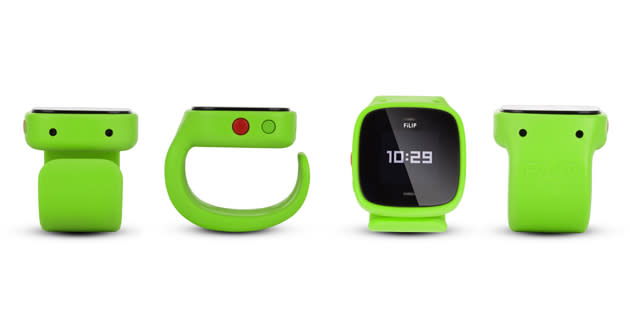 It is difficult enough to turn around one niche product category and make it successful, as Apple did with the iPad. But combining two marketplace failures is almost certainly a recipe for disaster. FiLIP, the new kid-tracker, is part connected watch, part smartphone. Prior attempts to optimize these devices for children -- or at least for the parents who want their kids to wear them -- haven't been well received. On the wristwear side, there was the Wherify Wireless watch, a monstrous wrist-locked GPS device. It was so optimized for the kidnapper-concerned that it sent an alarm message over the cellular network if it was removed without authorization.

On the kid-phone side, there was Firefly Mobile, which started with a small translucent phone that was limited to calling just a few known numbers. It was followed by Kajeet, a mobile virtual operator focused on helping parents manage and track their kids. Kajeet struggled, although at least part of its pain came from financing woes having little to do with the merits of the business.

Now FiLIP Technologies is hoping that it can change the course of following kids' courses with a cellular-connected and GPS-enabled open-strap watch that is easy to put on and take off. The FiLIP watch was inspired by an incident in which the company's founder lost his 3-year-old for half an hour. But it's different than products that have come before in three ways.

In terms of marketing, consistent with its technology approach, FiLIP Technologies is walking the fine line between presence and paranoia.

In terms of technology, FiLIP provides a two-way link between guardian and child. Cellular capability, of course, is important for helping identify location, particularly indoors, but FiLIP includes the ability for the child to initiate a call, which can be empowering and provide peace of mind for the kid as well as the parent; not every use case has to be a panic-laden emergency. Parents can also send standard SMS messages to the watch. Of course, many schools have prohibitions against cellphones, but they may be more amenable to the FiLIP, which doesn't offer distracting games, send texts or do much else initiated by kids except to make calls to a few pre-selected numbers. Like so many new products, FiLIP comes with a companion smartphone app that allows looking up locations and activating emergencies.

In terms of marketing, consistent with its technology approach, FiLIP Technologies is walking the fine line between presence and paranoia. Rather than fearmongering, it is selling the FiLIP as a way to keep in touch, which is more in tune with how phones are sold. Paradoxically, however, it is invoking a simpler time before the term "helicopter parents" was used to describe overprotective guardians and kids played outdoors in a cloud of societal comfort.

In terms of timing, carriers are now eager to move beyond the smartphone, which is nearing saturation in the US. AT&T will be the exclusive distributor for the FiLIP watch to start. FiLIP is aimed at kids from about 5 to 11, a market that isn't well-addressed by smartphones today. Many parents have concerns about giving kids a full-fledged smartphone; FiLIP isn't a throwaway purchase at about $200 or impossible to damage or lose. However, it is protected by its silicone-like removable encasement and, like the storied head-risking loss in other circumstances, it is at least more or less attached to one's person.

FiLIP may be an e-leash, but it's one that allows kids to tug back.

The FiLIP is bulky, however. And these days, it can be hard to get kids to adopt anything that doesn't feature their favorite licensed pop idol, superhero or cartoon character. But, while noting that girls have expressed interest in more colors than the traditionally unisex green coming out of the gate, the company claims that kids of both genders love its product. In fact, one child in a field test cried when he had to return it.

Since it's being tied to a carrier, service pricing will be as important a factor as device pricing. FiLIP doesn't use a lot of data compared to most smartphones and AT&T needs to consider families with multiple kids. It will charge $10 per month either standalone or as part of its Mobile Share plans -- the same price it had announced for a less-expensive Amber Alert GPS device that can be dropped in a backpack.

FiLIP may be an e-leash, but it's one that allows kids to tug back. In these early days of wireless networks brimming with wearables, it seems to create a win-win-win among parents, children and carriers.

Ross Rubin is principal analyst at Reticle Research, a research and advisory firm focusing on consumer technology adoption. He shares commentary at Techspressive and on Twitter at @rossrubin.
In this article: column, eleash, HelicopterParents, rossrubin, safety, switchedon, wearable
All products recommended by Engadget are selected by our editorial team, independent of our parent company. Some of our stories include affiliate links. If you buy something through one of these links, we may earn an affiliate commission.