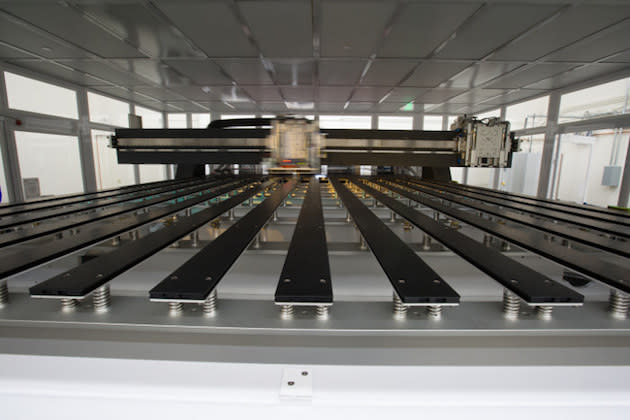 Even though California startup Kateeva demonstrated it could print OLED displays way back in 2010, the printer it used was a prototype meant strictly for show and tell. The age of printed OLED TVs might finally be upon us however, as the company recently unveiled the YIELDJet, a machine it's calling the "world's first inkjet printer engineered from the ground up for OLED mass production." The machine is quite an impressive affair, comprising a shifting slab capable of handling glass or plastic sheets big enough for six 55-inch displays along with custom print heads designed to emit teeny tiny OLED pixels.

Why is this a big deal? Due to the oxygen and moisture-hating nature of OLED ingredients, current OLED televisions are built with tricky vacuum evaporation and shadow masking techniques that are too inefficient and wasteful to be inexpensive. The YIELDJet, on the other hand, prints the LEDs in a pure nitrogen chamber to avoid those problems, plus it promises better film coating uniformity as well. This, Kateeva said, will hopefully result in OLED TVs that won't cost an arm and a leg yet still look stunning when hung on your living room wall. Combined with Sony and Panasonic's separate efforts to mass-produce the stellar-looking sets, we certainly hope that day comes sooner rather than later.

In this article: hdpostcross, kateeva, oled, oledtv, tv, yieldjet
All products recommended by Engadget are selected by our editorial team, independent of our parent company. Some of our stories include affiliate links. If you buy something through one of these links, we may earn an affiliate commission.