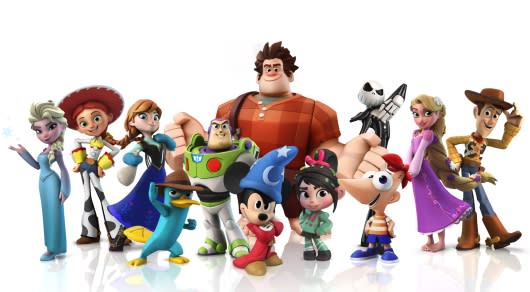 Disney Infinity aims to live up to its name with the addition of three movie franchises to the platformer/adventure/sandbox/whatever-it-is game. Wreck-It Ralph and Tangled characters Ralph, Vanellope and Rapunzel have already found their way into stores, while Anna and Elsa from Frozen have yet to arrive.

Ralph is available exclusively at Best Buy until December 31, while Vanellope is exclusive to Target until the same date. Walmart, meanwhile, gets to braid and play with Rapunzel's ludicrously long hair until December 31 as well. Anna and Elsa will be released nationwide on November 26, a day before the movie they star in. So if you already know you're going to love the movie and its characters - or you're a time traveler and have already seen the movie - these toys are for you. And everyone else who can find them.

Along with the characters, Disney Interactive will also be releasing 20 new Power Discs. These discs grant various in-game bonuses, from items and aesthetic changes to boosts and abilities. You can see the full list of discs and their effects after the jump:

Among the exciting new character additions to the game's signature Toy Box mode are Rapunzel (from "Tangled"), Wreck-It Ralph and Vanellope (from "Wreck-It Ralph") and Anna and Elsa (from the upcoming movie "Frozen") - all available in the UK from Friday, 29th November.

Key highlights of new characters include:

* Wreck-It Ralph: The classic 8-bit character is making an appearance in a new video game! Ralph uses his wrecking abilities and 8-bit Cherry Bombs to defeat enemies in Toy Box.

* Vanellope: The Sugar Rush racer brings her amazing Glitch ability that will allow her to teleport short distances and glitch out characters that come in contact with her in Toy Box.

* Frozen Toy Box Pack: Featuring Anna, Elsa and two hexagonal power discs, these characters deliver girl power to the Toy Box in a big way. Anna will use her grappling hook to get to hard-to-reach places and use her shovel to defeat enemies. Elsa will utilize her magical ice abilities, such as using the Freeze Ball to stop opponents in their tracks.

In addition, from today 20 new Power Discs are available in the UK, including three new "rare" versions featuring the "Electric Mayhem Bus" from the world of The Muppets, the "Condor Wing Glider" and Captain Hook's ship from the classic Disney Parks ride. Circular Power Discs give characters special power-ups that can be used in both Play Sets and Toy Box. Hexagonal Power Discs unlock special gadgets, vehicles and themes in the Toy Box.

* Electro-Charge - In-game character has a chance to gain more health.

* User Control - In-game character has a chance to gain experience at a faster rate.

* Flamingo Croquet Mallet - Spawn a Flamingo croquet mallet from "Alice in Wonderland" inside the Toy Box.

* Victor's Experiments - Make all of the terrain objects in the Toy Box themed to the "Frankenweenie" film.

* New Holland Skyline - Make the sky in the Toy Box themed to the "Frankenweenie" film.

* Frozen Flourish - Make all of the terrain objects in the Toy Box themed to the "Frozen" film.

* Chill In The Air - Make the sky in the Toy Box themed to the "Frozen" film.

* Maximus - Ride Maximus from "Tangled" inside the Toy Box.

* Jack's Scary Decorations - Make all of the terrain objects in the Toy Box themed to the "Nightmare Before Christmas" film.

* Halloweentown Sky - Make the sky in the Toy Box themed to the "Nightmare Before Christmas" film.

* Hangin' Ten Stitch with Surfboard - Spawn a hover surfboard with Stitch on the front inside the Toy Box.

* Condor Wing Glider - Spawn a glider pack that is Wings ala Condor Man inside the Toy Box.

* Hook's Ship from Peter Pan Ride - Spawn a flying airship themed after Captain Hook's ship inside the Toy Box.
In this article: 3ds, anna, collectibles, disney, disney-infinity, disney-interactive, elsa, frozen, microsoft, nintendo, pc, playstation, ps3, rapunzel, tangled, toys, vanellope, wii, wii-u, wreck-it-ralph, xbox
All products recommended by Engadget are selected by our editorial team, independent of our parent company. Some of our stories include affiliate links. If you buy something through one of these links, we may earn an affiliate commission.