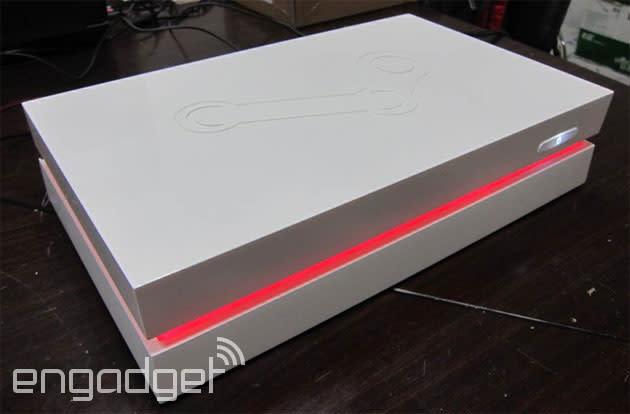 That game console headlining this text? It isn't a white PS4: it's a commercial Steam Machines box, or at least a prototype of one. iBuyPower tells us that it's building the box for a 2014 launch, but says it's still early. The company says the prototypes are running an early build of Steam OS, but it's not quite a finished product. That rings true of our impressions of Valve's own reference model, which hosted a version of that same OS devoid of media playback and streaming options and had a very limited selection of games.

iBuyPower tells us that it actually has two models, codenamed Gordon and Freeman, in the works. The two consoles are identical, save for the light bar round the middle -- one model's is clear, while the other's is black when not illuminated. And, while the company wouldn't tell us about the boxes' internals, it did confirm that the hardware will run all Steam titles in 1080p resolution at 60fps. Not as much info as we'd like to know, but still, it's good to see hints of what we'll see from Steam Machines when they hit the market -- though we'll likely have to wait until CES to see them in action. Update: The Verge reports that the Steam Machine will pack a multi-core AMD CPU, AMD Radeon R9 270 graphics card and be bundled with one of Valve's Steam Controllers for $499 when it arrives. It's not clear which model that list of specs and price tag apply to, but we've reached out to iBuyPower for clarification and will update once more as soon as we find out.

In this article: ibuypower, prototype, steam, steambox, steammachine, steammachines, steamos, valve
All products recommended by Engadget are selected by our editorial team, independent of our parent company. Some of our stories include affiliate links. If you buy something through one of these links, we may earn an affiliate commission.