We love when we find new ways to bring our toys together. The Automatic Link does just that: it connects your iPhone to your car's computer, using Bluetooth Low Energy as a bridge to the On-Board Diagnostics (OBD) interface that's been standard in most cars since 1996. Coupled with a free app, you can log various stats from your road trips, including how aggressively you drove and how much gasoline your car consumed. Basically, it's sort of like a quantified-self tracker, but for your vehicle. So, does this $100 driver's assistant deliver? Let's see. 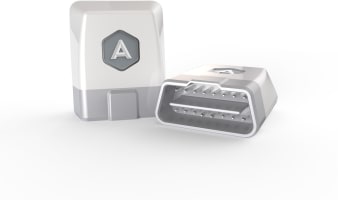 The Automatic Link dongle is a small, simple device with a single OBD-II port and a speaker. There really isn't much to it, which is fine because after you locate the port on your car and plug the device in, you might notice it again. Internally, it features a Bluetooth Low Energy module and... we can't think of much else that's worth mentioning. Ultimately, this is just a Bluetooth LE-to-OBD-II bridge, and an expensive one at that. At $100, it costs about five times as much as other OBD-II bridges available online, but then again, most of the magic happens in the software, which is free on the App Store.

Setting up the Automatic Link couldn't be easier; in fact actually finding the OBD port in your car may be the most difficult part. After you plug the little guy in, just turn your car on and complete the rest of the setup process from your iPhone. The first time you launch the app, it'll prompt you to set up a car. This means entering a six-digit code printed on the back of the Automatic Link and, in some cases, keying in your Vehicle Identification Number (the VIN can be automatically detected on some cars). After that, it's all supposed to be automatic. The Automatic Link only works with iOS devices. Since it relies on Bluetooth Low Energy and GPS, you'll need an iPhone 4s or newer -- and no, iPads and iPods aren't supported. The Automatic Link pulls data from the car's computer and sends the information to the app for processing. The headline feature is its ability to track your trips and driving habits, in the hopes of saving you money at the gas pump. In particular, it estimates the cost per trip based on the actual fuel consumed by the engine and the average price of gasoline in your area. Unfortunately, you can't manually enter the price you really paid, and worse, it assumes you use regular unleaded, with no way to correct it if your car requires premium.

There's a running total per week of your trips with counters that track how often you exceed 70 miles per hour, press hard on the accelerator or slam the brakes. These counters can be accompanied by an audible tone for real-time feedback. The bad news is that these, too, aren't adjustable, and we found the acceleration warning particularly annoying as it didn't seem possible to start from a stop without setting it off. By now, we've also seen similar complaints on the company's support forum, so a sensitivity adjustment seems in order. The speed warning might be useful for those who mostly drive on roads where the speed limit is 70 MPH, but that doesn't apply for yours truly. We did leave the alert for hard braking enabled, as that seemed to encourage safer driving.

Other than the audible alerts emitting from the Automatic Link under your dash, there isn't any other real-time functionality. While you're driving, the app itself only displays "Currently driving" when it's recording a trip. There's no current speed, location, fuel consumption or any other geeky automotive telemetry. After the trip is over, you can review the route on an overview map (that doesn't allow zooming).

In addition, the map shows you where you were when you committed a faux pas, as well as a summary with the total number of hard brakes and accelerations, and minutes spent above 70 MPH. You can also view the distance, estimated price and fuel efficiency during that trip. All useful and interesting information, but also pretty limited as this is the only view. There's no way to add notes to the trip, view them on another device or export them -- say, for an expense report. Hopefully a full-data export is on the horizon; that might at least hold us over until more feature-rich reports and graphs are added. Before we get into the secondary features of the Automatic app, we should cover reliability. When a company chooses a name like Automatic, it's setting high expectations. In this case, those expectations weren't met. The first clue that manual intervention is required can be found at the top of the settings menu in the app. Just under your name and email address is an option titled "Missing a trip?" -- and for good reason. This thing misses a lot of trips. Essentially, the Automatic Link relies on Bluetooth to wake up the app on the iPhone when you start a trip. Well, anyone who's relied on the iPhone's BT knows how this is going to turn out. The only way we ensured every trip was correctly captured was to manually check that the app was running before we embarked. This is hardly automatic and begs the question: Why would a company rely on the iPhone to track something when it has built its own hardware? Why not log the trip in the Automatic Link and then upload to the app later? Or use an audible alert to notify the driver when the app isn't currently connected? We'd prefer either of those options to manually checking up on it.

Some of the app's less important features are its ability to display engine trouble codes, notify contacts and authorities of a crash, and help you remember where you parked. We didn't go so far as to purposely break or crash our test car to evaluate its code-reading abilities, but we did look to the app to help remember where we parked. All told, the Automatic Link got us close enough to hear the car's alarm (hitting the panic button on the key fob has always come in handy to locate a lost car), but that's about it -- assuming the app was tracking our trip when we parked.

The bottom line is that all three of these features are nice to have, but they all play second fiddle to trip-tracking. One feature that's noticeably absent, though, is the ability to track car service. Keeping good service records can not only be essential to your car's reliability, but it can also increase your resale value. Allowing you to track exactly when you did what to your car would've fit very nicely with the overall utility of Automatic. We hope it's high on the company's list of future design priorities. If you're looking for technology that will help you learn to lay off the accelerator in order to save money, then this fits the bill. The company claims you could easily pay for the cost of the Automatic Link in the first year, and we believe it. That being said, you don't need to spend $100 to learn to ease off the gas pedal. So, while the Automatic is designed for the average driver, we wish it were designed for the enthusiast or road warrior. Even if the app weren't designed for us gearheads, we at least wish the hardware were open enough that third parties could integrate it into their products. In the end, our wish list is longer than our like list, but this is still a compelling device, especially if the app has room to get smarter over time.