Whirligig: the generation, jury rigging, and joys of the gyrocopter 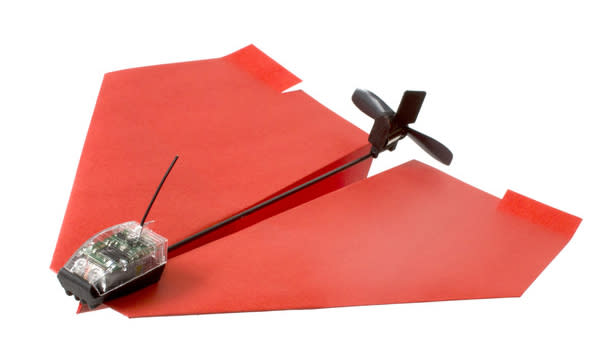 Thank you, PowerUp. Apparently the last time we had the opportunity to write about paper airplanes was back in 2011, when a Seattle doctor built a tiny one using a da Vinci surgical robot. This time out, it's a Kickstarter project that brings smartphone control to the notoriously staid world of paper airplanes. The gadget's setup is pretty simple, all said. At the front is a Bluetooth module and battery, while the back contains the propeller and rudder. Build a paper airplane, attach the PowerUp up and boom, you've got RC aircraft you can control with your smartphone. Creator Shai Goitein has taken the project to Kickstarter in an attempt to score $50,000 in funding. A pledge of $30 will get one of these little fliers in your hands, come May of next year. That's plenty of time to practice your folding skills.

In this article: paper airplane, paper airplanes, plane, powerup, remote control
All products recommended by Engadget are selected by our editorial team, independent of our parent company. Some of our stories include affiliate links. If you buy something through one of these links, we may earn an affiliate commission.