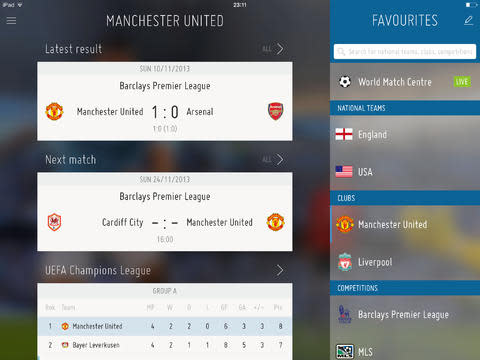 Now that we know which 32 football nations will be on the quest for global domination in Brazil, FIFA, the sport's governing body, decided it was the right time to release a set of apps for iOS and Android. These official applications, which are free of charge, provide fans with access to a ton of footie-related stuff, including news, videos, photos and match results from nearly 200 leagues. The FIFA app also lets you mark up to three national teams, clubs and competitions as favorites, allowing easy access to information from those followed the most. Better yet, FIFA's going to be using its new mobile ware to stream the 2014 World Cup Final Draw on December 6th, so you'll be able to see in real-time what road lies ahead for your country.

In this article: FIFA, FIFA World Cup, football, soccer, World Cup, World Cup 2014
All products recommended by Engadget are selected by our editorial team, independent of our parent company. Some of our stories include affiliate links. If you buy something through one of these links, we may earn an affiliate commission.