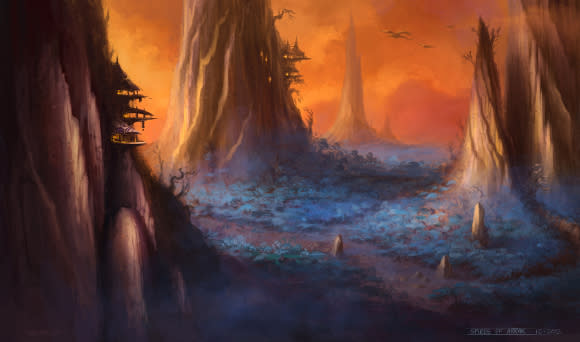 We've been talking a lot here on WoW Insider about the new group-finder tool Blizzard will be putting together to rival the tremendously popular oQueue (yes that is the real link) come 6.0. Lead Systems Designer Greg "Ghostcrawler" Street mentioned another tidbit on Twitter which tied in with what our commenters here at WoW Insider have been bringing up.

One reason why I love reading the comments is that they often point out ideas and insights that I would otherwise have missed. And exactly that has happened here. As the tweet Greg responded to said, the new system needs to be an LFM system not an LFG system. And, as several commenters have added, here's why.

So what's the difference between LFG and LFM?

Greg hits it in his response to the tweet. On a basic level, LFG is an individual looking for a group, and LFM is a group looking for more individuals. Think back, if you will, to the days of Tol Barad. Once your faction had won the battle on the island, your trade chat would suddenly fill up with "spriest LFG" along with their item level, the relevant achievement for the boss at the time, if they had it, and the request to either PST or /w, depending on what side of the Atlantic you were playing on. It always amused me how, although Trade was filled with LFG, barely anyone started their own group to LFM. As a tank, at the time, I often did exactly that, and believe it or not, I would be ready to go in no time.


That's why oQueue has been such a runaway success, because it's LFM, not LFG. While it's very important to note that the current augmentation of the in-game raid finder is not indicative of Blizzard's goals for the eventual group finder, among the current system's issues is that it is both LFG and LFM. Visiting the "Browse" mode means you have to wade through individuals looking for groups, and pick out the groups looking for individuals among them. This is the crux of oQueue's success. Nobody's saying "take away LFG tools", only that with LFD and LFR we have those in abundance. What we need,though, is not more of them.

What's so great about LFM?

First up, it's faster. It's psychologically an easier thing to do to sign up for multiple groups and see if you're successful than it is to either create a group for yourself, or to actively select one of an advertized set of people. Doing the latter adds all sorts of hurdles, by which I mean things that might make you think twice. Is this person going to be good for the group I'm setting up? Will the other people already in my group resent this choice? Is the person I'm looking to invite even interested? Selecting from a pool of applicants based on whatever criteria you like is a far easier task. A lot of the decision-making has been done for you. And for the player that isn't making the group, too, the way oQueue works is really easy to handle. You can see which groups you qualify for by simply showing the addon your stats and checking the box that says "qualified". You click "wait list" on the ones you're OK for, then wait. Sometimes you'll get in, sometimes you won't. You keep trying, and you'll get a group before long. There's no harsh rejection, you just don't get in, and the blow is usually softened by how quickly you do find a group.

oQueue works fantastically for people who do want to lead groups, too. Yes, the interface is clunky. From a recent chat with oQueue's developer, Tiny, the reason behind that is that he started with no experience in .lua, the programming language of WoW addons, and has never rebuilt it from the ground up. But despite its clunkiness, it works pretty well for group leaders. You can set up all sorts of requirements, from ilvl to achievements, and this makes selecting your group even easier. Want a high-geared group for a fast run? You're set. Want to just get as many people as possible for a celestials run? Game on!

Leader of the Pack

Speaking of leaders, the key to PuG content is that, unlike randomly matched LFG content, you have a leader. The person who starts the group is generally recognized as being willing to lead it. Willing to tell people what to do, or if not that, then willing to assign someone to do so. This is important in Blizzard's eyes, as they feel that organized PuGs can accomplish far more than randomly matched groups.

The importance of a leader is paramount, and one issue in the game right now that the group finder could go a long way to fix is that there's nothing attached to taking on that responsibility. Sure, tanks are often considered the leaders of groups, and they are rewarded with shorter queue times and occasional bags, but that doesn't really recognize leading, instead it's a reward for playing an underplayed role. Healers can get exactly the same at times, for a far less pressured position. In talking with Tiny about oQueue, one thing we agreed on was that while Blizzard does a lot to recognize the importance of leaders in PuG groups, it does little or nothing to reward them for taking on that role. Among my friends at least, part of the reason why those who play plate classes refuse to tank is that they don't want the responsibility. They don't want to lead the group. If there was an incentive to do so, would that change their mind? Maybe.

oQueue has a system in it to recognize group leaders, awarding them points for leading, and Blizzard would, in my opinion, do well to add something similar to their own system. The beauty of LFM is that there are leaders, they are a necessity for such a system to work, and while they might not be perfect, they were the ones who stepped up and created groups that the rest of us joined. Perhaps additional currency, perhaps points or tokens, perhaps just gold. Something to reward leadership.

And there is nothing at all that says the group leaders have to be tanks. You can lead a group just as well, if not better, from a DPS or a healer role. And in PvP, especially in rated battlegrounds, tanks are not as regularly seen as they were. Really, DPS classes need to be leaders in RBGs, calling targets, calling switches and so on. As the defining element between random battleground and organized group, between LFR and PuG raid, leaders should be recognized.

In this article: group-finder, lfg, lfm, oqueue, tanking
All products recommended by Engadget are selected by our editorial team, independent of our parent company. Some of our stories include affiliate links. If you buy something through one of these links, we may earn an affiliate commission.