Dropbox lets you preview more file types without having to download

MIT teaches machines to learn from each other 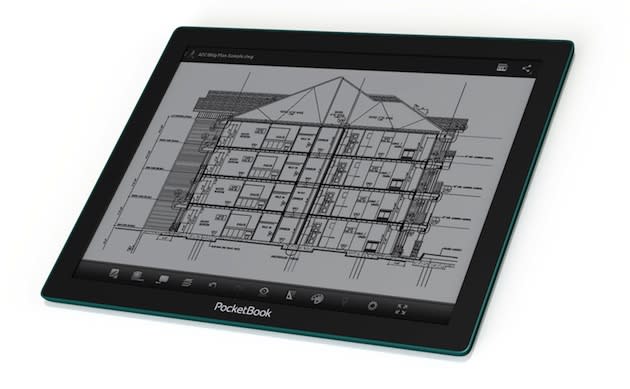 That Kindle Paperwhite is pretty thin and light already, but future e-readers could be even skinnier thanks to a new screen technology from E Ink known as Fina. The tech uses a super thin glass substrate that'll supposedly result in displays that measure less than 50 percent in both thickness and weight when compared to "an equivalent glass-based TFT." According to a released statement, this makes Fina ideal for large tablets that also need to be lightweight, which is exactly why it was implemented in the PocketBook CAD Reader, a new 13.3-inch device that's also the first to use Fina. The slate has a dual-core 1GHz processor, 2GB of RAM, 16GB of storage space and it runs Android 4.0.4. Of course, we wouldn't expect to pick this up at Best Buy any time soon, as it's primarily meant for displaying drawings from Autocad. Indeed, PocketBook even said it's made to be used on construction sites, not by everyday consumers. Still, we wonder if Fina's arrival means we'll see larger format e-readers in the future, especially for all those DX lovers out there. In the meantime, check out the source link below for more details on E Ink's latest innovation.

In this article: autocad, cadreader, e book, e books, e reader, e readers, e-book, e-books, e-reader, e-readers, eink, fina, pocketbook
All products recommended by Engadget are selected by our editorial team, independent of our parent company. Some of our stories include affiliate links. If you buy something through one of these links, we may earn an affiliate commission.