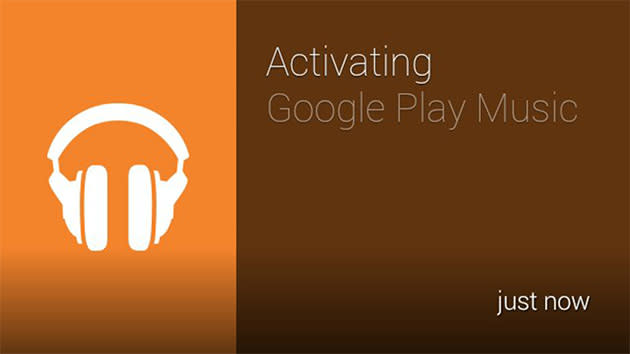 Glass Explorers who weren't adventurous enough to sideload Google Play Music onto their wearable for an early taste of the app have just gotten easy access to it. Mountain View's just listed the tune player on the MyGlass application and in the Glassware section of its companion website. Once the app is set to "On," Glass will automatically download the software and unlock a new "listen to" command. By wielding the magic words users can speak to pull up albums, artists, playlists and songs they've uploaded to the service and those available through Google Play Music All Access. We took the app for a spin and there don't appear to be any notable changes compared to the version we installed by hand. If you were one of the intrepid users who loaded up the app ahead of time, you'll have to uninstall it through the Android Debug Bridge in order to successfully score it via MyGlass. If you're itching to make the most of tune streaming on the hardware, you can grab ahold of stereo earbuds from Google designed just for the device.

In this article: app, Glass, GoogleGlass, GooglePlayMusic, GooglePlayMusicAllAccess, music, ProjectGlass, wearable
All products recommended by Engadget are selected by our editorial team, independent of our parent company. Some of our stories include affiliate links. If you buy something through one of these links, we may earn an affiliate commission.