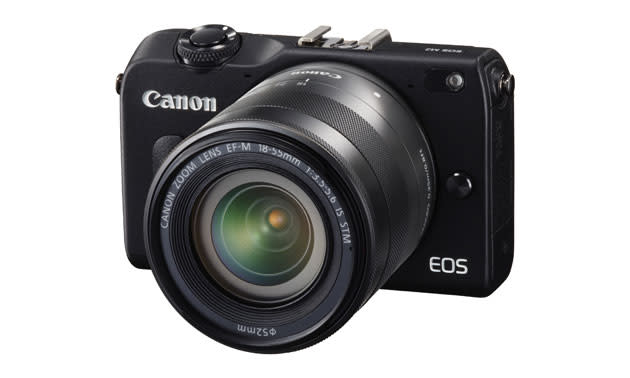 Canon (finally) launched its first mirrorless interchangeable lens camera last year and while we loved the design and the image quality of the EOS M, the focusing speed, well, left a lot to be desired. The EOS M2 looks set to answer that particular issue. Announced today, and ready to launch in a few weeks, the new ILC promises auto-focus speeds over 2.3 times faster than the EOS M. Canon credits its new Hybrid CMOS AF II system for the improvement, which expands the focus window it monitors up to 80 percent of the total viewfinder -- that's over double the size of the area on the camera's predecessor. The built-in APS-C sensor remains the same, although Canon has solved the curious blacked-out screen issue that occurred on the original EOS M whenever you took a photo.

Canon's also crammed in WiFi connectivity for wireless sharing and, according to the PR shots, has left the design of the EOS M2 body largely unchanged. With a kit lens, it'll arrive later in December priced at 84,800 yen (roughly $820), or you can choose the body alone for 64,800 yen, putting the price around $627. Once we hear when and where the new ILC challenger is heading post-Japan, we'll let you know. We're hoping to play around with it very soon.

In this article: canon, eosm, eosm2, ILC, MirrorLess
All products recommended by Engadget are selected by our editorial team, independent of our parent company. Some of our stories include affiliate links. If you buy something through one of these links, we may earn an affiliate commission.