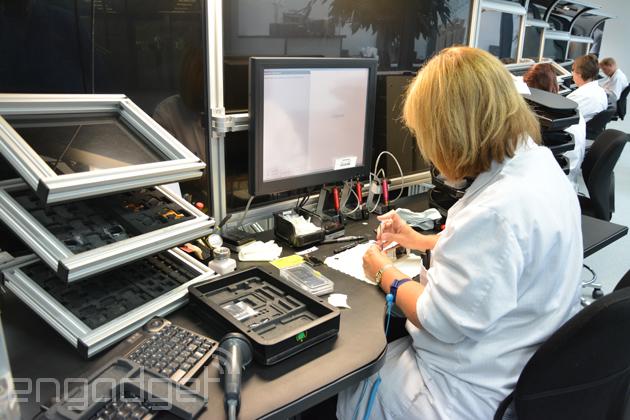 While not everyone's comfortable with splashing out on a fancy Vertu phone, there's no stopping us from appreciating the company's craftsmanship and engineering expertise since its Nokia days. We're talking about dealing with various luxurious materials -- pearl, ruby, sapphire, titanium, gold, alutex, alligator skin and more -- while making sure that each device is mechanically built to last. As such, it's perhaps a slight surprise that Vertu phones are actually "handmade in England." Courtesy of our buddy and CEO Max Pogliani, we got to see the process up close and personal at his 60-strong workshop in Church Crookham. (And in case your butler isn't around to read this article to you, we've also got a video tour after the break.) Unlike conventional manufacturing methods where one device is passed down an assembly line, every Vertu phone is put together by one person alone at his or her workstation. Each craftsman is surrounded by a monitor plus trays of components (mainly screws, gems, bezels and fixtures), some of which are placed on a stack of motorized rotating trays. At the press of a foot pedal, not only does the computer show the next work instruction, but the rotating trays also offer the necessary parts for that step.

Depending on the model, a Vertu phone can take two to three hours or up to a day to be fully assembled and polished. It is then placed inside a sophisticated (and very expensive) testing jig, which performs approximately 800 electronic and mechanical tests over the course of four to five minutes. After a final visual inspection, voila! A new Vertu phone is born. It'll most likely be sent off to one of the boutiques around the world, though there's also a small chance that it'll end up being a guinea pig for Vertu's various reliability tests: drop test, tumble test, humidity test and temperature test. Just too bad Vertu doesn't sell its test subjects with a discount.

In this article: factory, featured, features, luxury, mobilepostcross, phone, signature, ti, tour, vertu, vertusignature, vertuti, video, visualized, workshop
All products recommended by Engadget are selected by our editorial team, independent of our parent company. Some of our stories include affiliate links. If you buy something through one of these links, we may earn an affiliate commission.