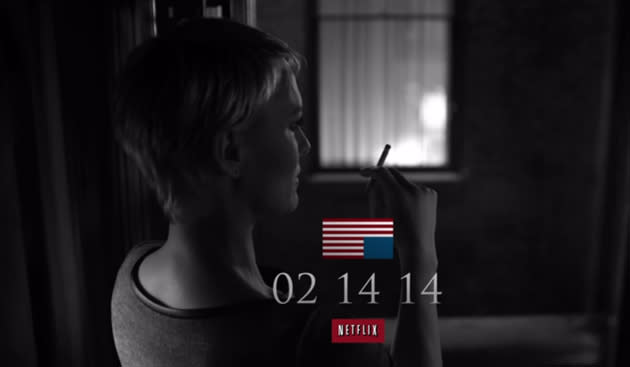 In what we can only hope will be a dog murder-free second season, Netflix announced this morning that original series House of Cards returns on February 14th, 2014. Apparently Netflix is big on releasing original programming alongside holidays -- smart, considering the binge-viewing around said time periods. It's a big date for the Kevin Spacey vehicle, with the entire 13-episode season launching on Netflix at once in all territories Netflix is available (the US, Canada, the UK, Latin America and Ireland).

The show received a smattering of Emmy nominations earlier this year -- HoC is one of several major plays Netflix is making into original programming. Both Orange is the New Black and Arrested Development's revival led the Netflix initiative in 2013, and it looks like the same series that popularized original Netflix content will continue that push in 2014.

A new teaser popped up today alongside the Valentine's Day launch news, featuring Claire in a not uncommon place: smoking a cigarette by the window. See it for yourself below!

Update (12/13): Just as season two of Lilyhammer pops up on streams around the world, Netflix has released a two minute teaser trailer for season two of House of Cards. Check it out after the break.

In this article: hdpostcross, houseofcards, netflix, releasedate, seasontwo
All products recommended by Engadget are selected by our editorial team, independent of our parent company. Some of our stories include affiliate links. If you buy something through one of these links, we may earn an affiliate commission.