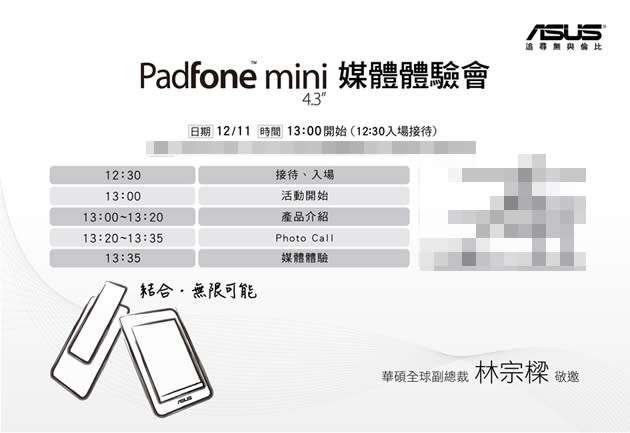 ASUS's PadFone hybrid Android tablet/phone series, weird as it is, seems to have found itself a niche. As such, the Taiwanese outfit looks ready to launch a new model, the PadFone Mini, according to a listing in the Global Certification Forum (GSF). That jibes with CEO Jerry Shen's earlier comments (translated) and a GFX Bench leak that showed Android 4.3, 960 x 540 phone resolution and a quad-core Snapdragon 400 CPU. The tablet part was rumored to be 7-inches, but another listing at Taiwan's NCC showed that, based on the weight, it could be bigger than that. We should find out soon either way, but you may be disappointed if you're looking for 4G speeds -- unless there's another model, the GSF listing shows 3G radios only.

Update: Well that was quick. Our brethren over at Engadget Chinese have just received an invitation -- pictured above -- for the PadFone Mini launch in Taipei next Wednesday. The little drawing at the bottom left of the invitation seems to confirm the smaller docking station as well. Stay tuned for more.

In this article: asus, GlobalCertificationForum, GSF, leak, mobilepostcross, Padfone, padfoneMini
All products recommended by Engadget are selected by our editorial team, independent of our parent company. Some of our stories include affiliate links. If you buy something through one of these links, we may earn an affiliate commission.