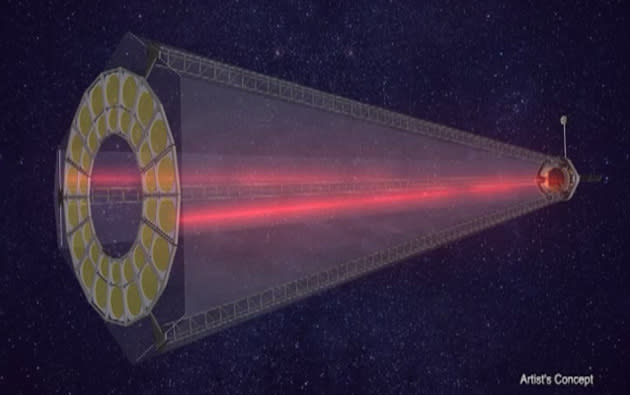 Researchers want higher-resolution images of the Earth from space, but glass-based telescopes won't always be up to the job; eventually, the necessary hardware will be too bulky to lift into orbit. It's a good thing, then, that DARPA recently tested a ground-based prototype of its MOIRE (Membrane Optical Imager for Real-Time Exploration) folding telescope. Like the future spaceborne unit, the ground telescope replaces glass with a high-efficiency polymer membrane that weighs one seventh as much and collapses into compact shapes. The optics would launch at a diameter of 20 feet, but they would expand to 68 feet. That's larger (and likely sharper) than what you'll see at many Earthbound observatories for quite some time. DARPA hasn't committed to a launch date for its folding design, but the finished device could image 40 percent of our world in one shot -- a major advantage for defense planners who may literally need to see the bigger picture.

In this article: darpa, folding, membrane, moire, polymer, science, space, SpaceTelescope, telescope, video
All products recommended by Engadget are selected by our editorial team, independent of our parent company. Some of our stories include affiliate links. If you buy something through one of these links, we may earn an affiliate commission.