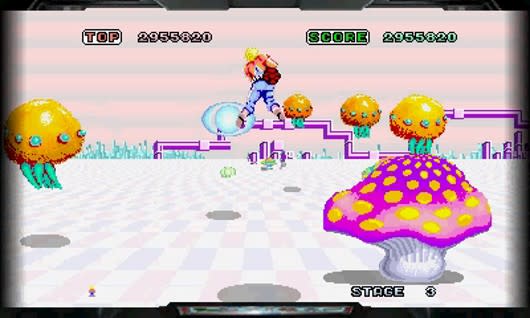 I never really thought much about Space Harrier. I like vintage Sega just fine, I just never spent much time with that particular game for whatever reason. Then I read this interview with M2, who ported it and the rest of the Sega 3D Classics line to 3DS, and I resolved to buy 3D Space Harrier as soon as it was released.

M2's obsessive love of Space Harrier, evident in the overwhelming, comical level of detail applied to the port, was the most ringing endorsement possible. The care put into the port made me care more about the game, showing the persuasive power of a truly bespoke adaptation. And by giving me cause to reevaluate Space Harrier, Sega's 3D Classics line allowed me to see just how well it holds up.

Space Harrier is vibrant in that classic Sega arcade way. Your character moves around the screen at insane speeds, while rocks, fireballs, moai heads, and serpentine dragons fly straight at him (and at you). The way enemies enter the screen in dance-like patterns suggests a classic shooter like Galaxian or Galaga, but with the speed turned way up and the perspective shifted, lending it the intensity of a modern shmup. Bright colors and fun, quirky text ("Many more battle scenes will soon be available!" the game says when you die) add to the idiosyncratic appeal.

M2's presentation takes a game that could only have been made by 1980s Sega and makes it feel modern in all the best ways. There's nothing retro about a 60FPS shooter on a handheld, especially one that displays in 3D. Optional settings go even further to make the 3DS version unique, with always-on (yet totally optional) touch controls, screen size settings to emulate arcade monitors or enable more modern widescreen, and even a mode that tilts the whole display to simulate the motion of a motorized arcade machine ... complete with motor and button noises recorded from a real Space Harrier cabinet. The motorcycle racer Super Hang-On benefits from a similar treatment. Its frame rate is also impossibly smooth, and it's been giving a large variety of options, like optional touch and tilt controls, a difficulty setting that alters the extent to which other racers can knock you around, and even the ability to choose between simulated "Sit Down" or "Mini Ride-On" cabinets, which affects difficulty and the cabinet graphics around the screen border. The cabinets used slightly different versions of the game code, and M2 actually bothered to give you a choice between them.

Like Space Harrier, M2's work has made me pay attention to an otherwise ignored old Sega game. With the option to make the other racers intangible, I can learn the courses, master the new (and thrilling!) gyro controls, and enjoy the soundtrack of Super Hang-On in a way that I never could before. Maybe I'll turn the difficulty back up later, when I've trained myself properly, but in the meantime I get to have a great time with a game that I previously found unfortunately frustrating. It may not be the revelatory experience Space Harrier is, but I'm able to cobble an impressively enjoyable session out of the racer. The options added by M2 range from fussily simulating the best possible arcade experience, to actually improving upon the original game (in optional ways, of course, to maintain the accuracy of the original work). The Sega 3D Classics line puts the standard 3DS Virtual Console work to shame, and does the same even for Nintendo's own moribund 3D Classics line – if Nintendo can be said to possess any shame after 3D Urban Champion.

I'm not suggesting that every Virtual Console release should aspire to the same intense custom work that the first two Sega 3D Classics have received. At best, that would slow the pace of Virtual Console releases well beyond the trickle we get now. Still, the effort put into the Sega 3D Classics deserves attention, and it commands extra attention for any game in the collection. Yes, that even includes Altered Beast, which is available now alongside Sonic the Hedgehog.

JC Fletcher is a stay-at-home dad to twins. He runs the handheld gaming site Tiny Cartridge in his spare time. You may remember him from websites such as: this one.
In this article: 3ds, eshop, m2, nintendo, sega, sega-3d-classics, space-harrier, super-hang-on
All products recommended by Engadget are selected by our editorial team, independent of our parent company. Some of our stories include affiliate links. If you buy something through one of these links, we may earn an affiliate commission.