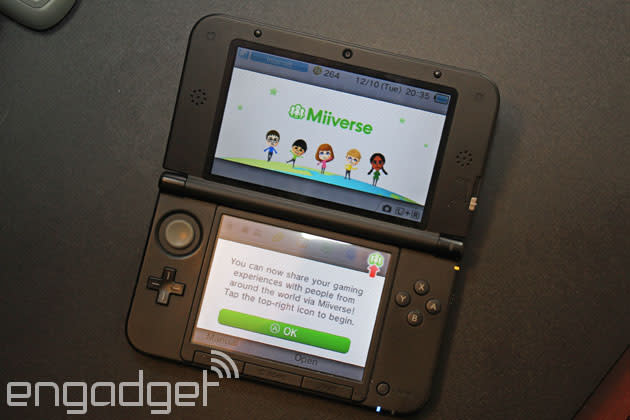 A year and a half ago, Hideko Konno hinted that Nintendo's Miiverse might eventually find its way to the 3DS. Now it finally has. The stereoscopic handheld's latest update is a doozy, not only brining the quirky social network to the dual screen, but integrating the handheld into its unified account system too. This is more significant than it sounds -- it's Nintendo's first major step towards unifying its fragmented eShop system, which currently maintains different storefronts for both the Wii U and 3DS devices. The console-specific eShops had their own separated digital wallets too, a frustration finally relieved by sharing funds through the linked Nintendo Network ID. The update does a decent job of walking users through the account linking process, and explains that credit card information, Club Nintendo details and even Mii data (when used in Miiverse) will be handled through the unified Network ID moving forward.

The Miiverse app works just like its Wii U counterpart. Players can launch the sharing community in-game by pressing the system's home button and tapping on the Miiverse icon, which takes them directly to the relevant game's community. From here, text, doodles and screenshots can be shared in the normal fashion -- and yes, some shared screenshots (like those from The Legend of Zelda: A Link Between Worlds) are even 3D. Nintendo says the update also provides minor tweaks for stability and user experience, including removing the limit on 3DS system transfers and requiring users to press L and R simultaneously to toggle the camera (a move designed to prevent accidental launches). All in all, the 3DS winter update seems solid, if long overdue. Planning to check it out? You may want to wait until morning, users on Twitter say that Nintendo's servers are a bit overloaded. 5
In this article: 3ds, 3ds update, gaming, miiverse, nintendo
All products recommended by Engadget are selected by our editorial team, independent of our parent company. Some of our stories include affiliate links. If you buy something through one of these links, we may earn an affiliate commission.