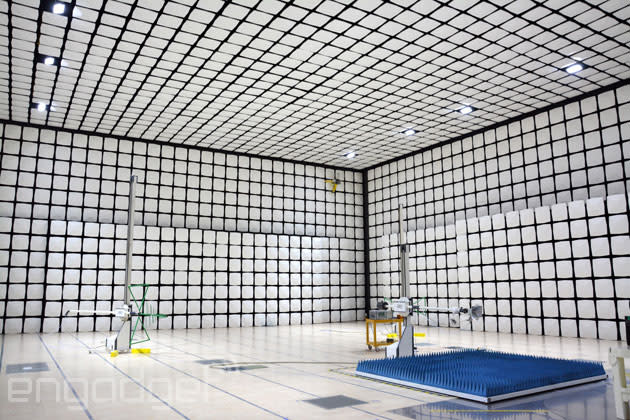 Samsung's EMC Laboratory is right in the middle of its huge "Digital City" compound in Suwon, Korea. This site goes through roughly 4,000 products a year, with different rooms tasked with testing different sections of Samsung Electronics' admittedly broad range. What you see above is a 75 by 59 feet chamber set up for the electromagnetic interference test, with three antennas pointed at a yet-to-be-released TV (not shown in the photo for obvious reasons). All of this is simply to gauge precisely how much interference the product outputs, to ensure it doesn't exceed certain levels. Do read on if you want more detail -- we've also got a video tour waiting for you. 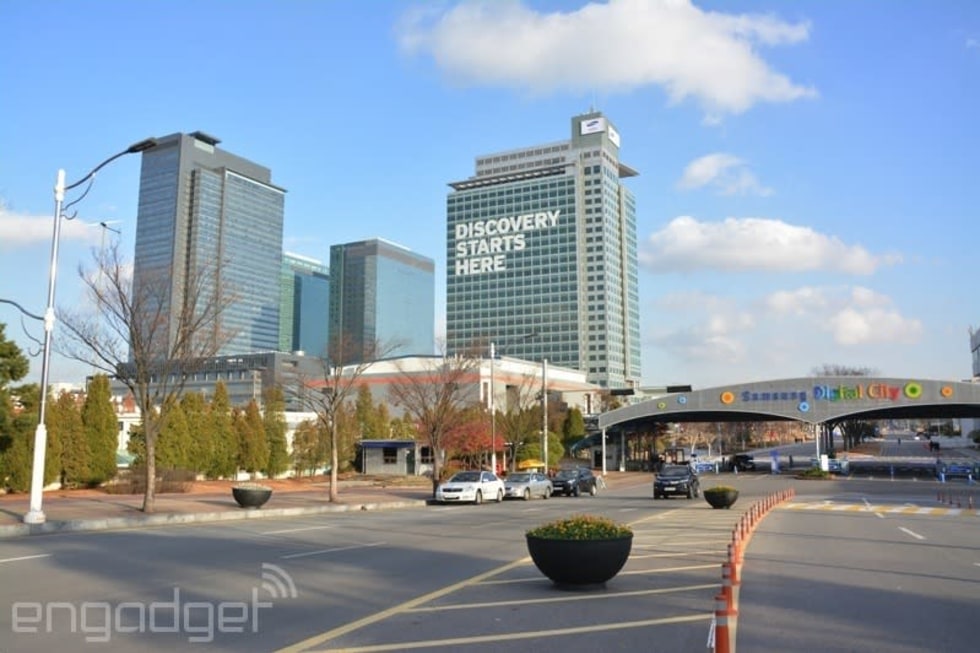 Engineers use either two large antennas to detect noise between 20MHz and 1GHz, or a standalone (and slightly more impressive-looking) antenna to pick up frequencies of up to 26GHz. In recent years, the latter test has become more significant due to the increasingly complicated (read: chip-heavy) state of modern consumer electronics. Whatever's being tested is placed on a rotatable part of the lab floor and is scrutinized from every angle. You may think that the white polystyrene plates on the wall are for absorbing the reflected noise, but it's really the black foam spikes underneath that do the job -- the white tiles are simply for keeping the room bright.

The 70-minute test is mostly an automated process (thus why there's no one in the room to disrupt measurements), during which the antennas receive a constant stream of data. Samsung doesn't expect a product to fail, as everything's designed to fall well below the limits; but if it does, production is stopped until engineers can figure out what went wrong.

In this article: DigitalCity, electromagnetic, emc, emclab, emclaboratory, emi, exclusive, interference, samsung, suwon, video
All products recommended by Engadget are selected by our editorial team, independent of our parent company. Some of our stories include affiliate links. If you buy something through one of these links, we may earn an affiliate commission.