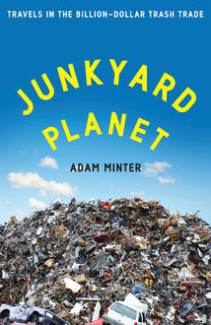 Macworld took a look at a new book by writer Adam Minter today; Junkyard Planet (US$25.99, Bloomsbury Press) explores the business of recycling, and in an excerpt from his book published by the website, Minter takes Apple to task on the effectiveness of its recycling program and attempts to lay guilt on the consuming public as well.

Starting off, Minter appears to have an issue with a comment on Apple's FAQ for its recycling program, where the company reassures potential recyclers that, "You are also ensuring that products that have reached the end of their useful life are recycled in an environmentally responsible manner in North America." Rather than taking Apple at its word (the company wouldn't tell him where the items were refurbished in North America), Minter immediately assumed that the work is being done outside the US, but quickly adds that "offering technically oriented employment to people in poor countries is a good thing."

After taking the lying corporation to the woodshed, Minter then finds fit to chastise consumers in general. He apparently doesn't realize that by publishing his book, he's killing trees (I seriously doubt if Bloomsbury is using 100 percent post-consumer recycled paper, hemp covers and artisanal soy ink in printing its books...), encouraging people to buy more e-readers and causing the consumption of energy through shipping physical books and recharging batteries. His main problem? The results of some experiments that suggest "that the addition of a recycling option can lead to increased resource usage" and that by offering a recycling option, Apple is encouraging people to buy new products.

Minter's next target? "Tight design," particularly aiming at the MacBook Air as an example of a product that is "built to be shredded, not repaired, upgraded and reused" when it is no longer useful. Yes, a lot of MacBook users miss the days when they could add RAM, a larger hard drive and a new battery pack to extend the life of an old device, but the incredible popularity of the MacBook Air's "tight design" seems to indicate that most consumers really don't give a rip about upgrading old devices -- they'd rather have a sleek, lightweight and ultimately refurbishable laptop.

I won't go into more detail about the book, the Macworld excerpt or the premise of both, other than to say if Minter and some of his readers are that concerned about the impact of Apple on the planet, they should just not buy its products or any other consumer electronics. Things aren't going to change overnight, and it appears to me (and environmental organizations) that Apple has been making progress that will ultimately lead to very earth-friendly products.

In this article: adam minter, books, consumerism, environment, junkyard planet, macworld, opinion, recycling
All products recommended by Engadget are selected by our editorial team, independent of our parent company. Some of our stories include affiliate links. If you buy something through one of these links, we may earn an affiliate commission.
Share
Tweet
Share