Amazon is bringing Prime videos and music to JetBlue's fleet 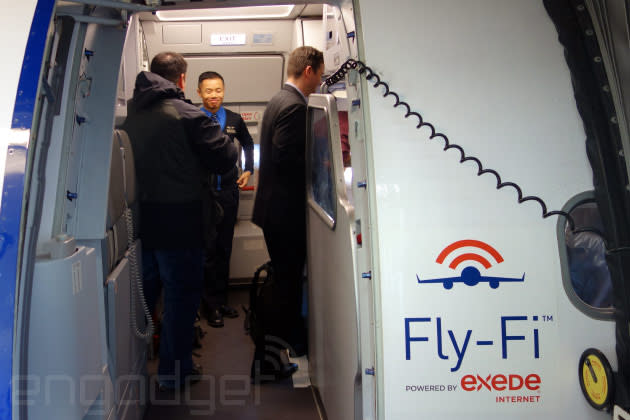 JetBlue's been quoting some pretty ambitious figures for its new ViaSat-powered in-flight WiFi, and during our test flight last month, the Ka-band satellite service seemed to be up to the task. The promise? A claimed 12 Mbps internet at every seat on the plane; enough to stream HD video, download new apps and conduct your online business just as quickly as you would on the ground. That performance pledge generally assumes that only a handful of passengers will be watching Netflix films and YouTube clips -- however, that condition went right out the boarding door when the airline filled a few dozen A320 seats with journalists eager to push the service to its limits on today's official launch flight. It was a charter plane to nowhere -- a 90-minute journey from New York's JFK airport to New York's JFK airport -- but for this group of passengers, it was the ultimate adventure.

Gate-to-gate WiFi is coming soon -- perhaps even before the end of the year -- but on the flight today, Fly-Fi came online above 10,000 feet. After a few minutes of inconsistency, the service screamed for the rest of our time in the air. I uploaded Instagram photos and videos and responded to tweets using my iPhone 5s, which was connected to JetBlue's free service, while my laptop was hooked up to the $9-per-hour Fly-Fi Plus. Both offerings performed just fine for basic surfing, but the paid version also excelled when it came to video streaming. I loaded 720p YouTube videos in only a few seconds, with minimal buffering, as you can see in the hands-on video below. Generally, the connection was much faster on the plane than it was in the JFK terminal, but it did seem to stutter a bit compared to the super-fast Verizon FiOS I'm used to at home.

With a latency of nearly one second, websites didn't load as quickly as they would on the ground. That speed bump comes courtesy of the 22,000 miles between ViaSat-1 and our plane, but after a few minutes of surfing with Fly-Fi, I didn't mind the delay. As I experienced with the previous flight, the service far exceeded competing ground-to-air services from Gogo and the satellite-based Panasonic WiFi on United's fleet. But there's good news on that front: LiveTV, the JetBlue subsidiary tasked with installing the Fly-Fi on the airline's A320s, has already begun rolling out an equivalent service on select United 737s. UA is expected to launch its own ViaSat-connected internet within the next few months. Still, JetBlue's been tapped as ViaSat's launch partner, so if you want to try out the most powerful in-flight internet on the planet, that's your best bet today. Other North American airlines may soon follow suit, however -- this is the beginning of the end for frustratingly slow in-flight WiFi.

In this article: fly-fi, hands-on, In-flightWifi, inflightwifi, internet, jetblue, viasat, viasat-1, video, wifi
All products recommended by Engadget are selected by our editorial team, independent of our parent company. Some of our stories include affiliate links. If you buy something through one of these links, we may earn an affiliate commission.