Spotify’s The Get Up is part morning show, part personalized playlist 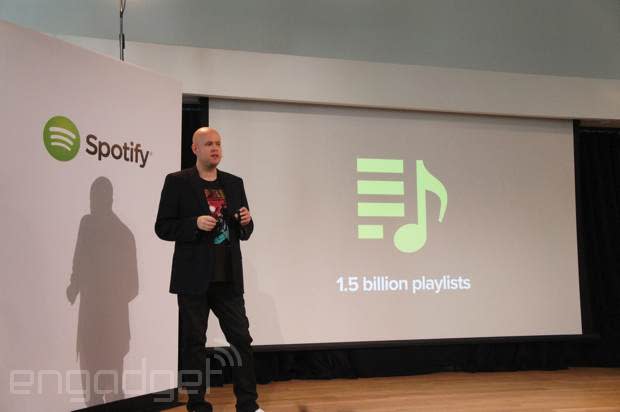 We can't say as we were particularly taken aback by today's Spotify announcement, after all someone spilled the beans the other week (thanks a lot, The Wall Street Journal) - but we trekked through a cold New York City morning to Spotify headquarters all the same. As anticipated, the company used the occasion to announce a free version of its tablet streaming service. Of course, nothing in this life is truly free, right? As such, the streaming offering will be ad-supported, much like the non-premium version of its desktop offering.

Ek kicked things off by rattling off some impressive numbers, including 1.5 billion playlists created (with one and a half million made each day) and 4.5 billion hours of music streamed last year, before launching into the big news of the morning. The new version of the service will work with both Android and iOS tablets and plays along nicely with the company's new Connect offering, so you can play that music through some of those high-end compatible speaker systems. You'll be able to access your playlists through your tablet devices, but beyond that the exec didn't break down the service too much, save for saying that it's "the same as the desktop experience."

In this article: spotify
All products recommended by Engadget are selected by our editorial team, independent of our parent company. Some of our stories include affiliate links. If you buy something through one of these links, we may earn an affiliate commission.