Late last year, Jawbone faced a herculean task: regaining consumers' trust after widespread reports of brickage on the original Up fitness tracker. The outfit was able to right many of the wrongs that plagued the first edition, but there was still room for improvement. You still had to plug the Up into a smartphone to sync your collected data; sleep tracking left a lot to be desired; and the iOS app needed more usable functionality beyond tallying steps and monitoring dietary habits. However, the 2012 model did offer more than seven days of battery life and, you know, kept working even after a week of use.

This time around, the company has finally opted to go wireless. Thanks to a Bluetooth Low Energy radio, the new Up24 can sync wirelessly and only needs to be plugged in when it's time to recharge. The convenience of wireless comes at a cost, however. The 2013 version got a $20 price increase to $150. So is the ability to sync wirelessly worth the extra coin? Are the software improvements impressive enough to make folks trust Jawbone above rival companies? I spent a few weeks tracking my every move to determine just that. 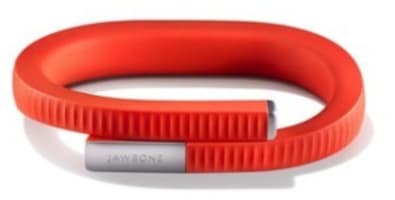 You're not alone if you confuse the Up24 with either of the previous Up bands. The new offering comes in two colors (black and orange) and sports the same rubber-coated exterior as before. Upon closer inspection, the unit now features a swirly textured pattern around its outer shell -- a change from the zigzag design on the 2012 model. The lone physical button, used for toggling between Sleep Mode, Power Nap and other functions, now has a slightly different texture as well. Opposite the button is the removable nickel-plated cap that hides the 3.5mm plug for charging. Recharging still happens over USB, with the help of an adapter. In some places, the new unit may be a hair thinner, but there are otherwise no significant changes to report there.

The simplicity of the Yves Béhar-designed original remains, and that's a good thing. Jawbone decided not to add a display à la the Fitbit Force; instead it's relying on its companion software to serve up your fitness stats (more on that in a moment). There are still two LEDs, though, and they're still situated around back by the band's button, indicating when the unit is awake (that's the sun icon) or snoozing (that'd be the moon).

One change you'll notice pretty quickly on the Up24 is the reduced battery life.

As with the previous models, you can use the physical button to activate a number of modes. Pressing once still shows whether you're in active or Sleep Mode; just press and hold to toggle between the two. When the band is awake (for lack of a better term), you can turn on the stopwatch by pressing once and then pressing and holding until the sun icon flashes and the band vibrates. Similarly, pressing the button followed by pressing and holding until the indicator flashes and Up24 vibrates in Sleep Mode triggers Power Nap.

Last year's model also brought improved flexibility and water resistance, and indeed, those features are still in play. I was sure to get the unit good and wet each time I washed my hands or did the dishes. Several weeks later, I still haven't had any issues. The Up24 is also just as flexible as the previous model. From time to time, though, the band would snag when I put on a jacket, sliding it about halfway down my arm, at which point I had to adjust it.

One change you'll notice pretty quickly on the Up24 is the reduced battery life. The ability to wirelessly sync your data means the runtime now hovers around seven days. That's the figure Jawbone has claimed, and so my experience was right in line with what the company is advertising. Of course, the band itself will remind you when it's low on juice using both vibrations and a push notification to your iPhone so you can plug it in for the requisite 90-minute recharge. I say iPhone because while there is an Android version of the Up application, the Up24 is only iOS compatible at this time. The Up24 arrives with version 3.0 of the Up app, which brings a smattering of new features and improvements. Otherwise, it largely looks like the software we familiarized ourselves with last year. First, there are notifications that get pushed to your iPhone when you're about to reach your goal. You might also receive alerts updating you on your progress. For example, after waking up in the morning and switching Sleep Mode off, I got a message letting me know how much shut-eye I got. These updates all arrive automatically without the need to plug in the device if you're using the Up24. There's also a sleep-recovery tool that allows you to manually enter your estimated hours should you forget to enter Sleep Mode before dozing off. Owners of the previous Up bands can enjoy all of these improvements -- everything aside from push notifications, that is.

Still, the app's main function is gathering your activity and sharing it among your "Team" of friends. Whether this provides adequate motivation or ongoing humiliation depends entirely on how active you are. As a way of keeping morale up, Jawbone's added two new progress features. "Today I Will" allows you to take things one day at time by setting goals like drinking eight glasses of water or packing in seven hours of sleep. Then there are Milestones. These are longer-term achievements like walking a million steps or hitting a certain goal two weeks in a row. In addition, you can still use the Trends view to keep tabs on your activity over the past few days, weeks and months. Meanwhile, the Recent Activities and Lifeline views organize your data into handy visual lists and graphs.

Like the previous build of the app, version 3.0 can still be used in tandem with a number of other applications if you're into the Internet of Things as a way of life. During the course of this review, I tied my account to RunKeeper, MyFitnessPal and If This Then That (IFTTT). As you might expect, integration with IFTTT opens up a whole new world of possibilities. Have a set of Philips Hue lights? You can program those to come on when you take the Up24 out of Sleep Mode or after you've been asleep for eight hours. The band can also trigger events with SmartThings and Belkin's WeMo power outlets (like turning on a coffee pot). And now those apps can all be activated wirelessly at the touch of a button, making the Up24 a part of your automated setup as well.

Food Tracking is back with a built-in barcode scanner. As ever, too, you can add images of your own choosing. Unfortunately, the food catalog isn't the most comprehensive and you'll have to manually add any items that aren't on the list. Once you log your food (Frosted Flakes, for example), it shows up in your activity feed for all of your friends to see. For both of those reasons, I found it easier and much less incriminating to log my meals via MyFitnessPal, a competing food tracker. Chances are, if you're already using MyFitnessPal to monitor your diet, you've already added items you consume regularly, and you're used to a much more robust database. Ditto if you're on Weight Watchers.

Sleep tracking on the original Up was pretty hit or miss. If you were hoping that the situation would be remedied with the Up24, that's unfortunately not the case... for the most part, anyway. If you're a so-called active sleeper like I am, go ahead and prepare yourself for sleep reports in the morning that are split into multiple segments. A couple of nights a week, my sleep pattern showed that I slept for three hours and then four hours or some such, even though I never actually woke up. This nocturnal tracking system still distinguishes between deep and light sleep, so perhaps my thrashing around was mistaken for a 2 AM trip to the restroom. Who knows?

With the Up24, you can now set Smart Alarms via the app, thanks to that newfangled wireless connection. Each time I set one, it went off as promised within that 30-minute light-sleep window, using vibrations to ensure I didn't wake up my wife as well. Power Nap, meanwhile, will activate the same vibrating alarm after you've snagged about 26 minutes of shut-eye. The Idle Alarm is also back to remind you to get up from your desk after a certain amount of time (these intervals are customizable). Finally, as mentioned a few times already, all three of these can be programmed via the app without the need to ever plug in the band. As far as we're concerned, the Up24's inclusion of Bluetooth connectivity makes it a no-brainer over the previous Up -- even if it is $20 more expensive. For $50 less, the Fitbit Flex offers wireless syncing, a sleek design and an LED display allowing you to keep an eye on your stats, but its sleep tracker doesn't work reliably. The outfit also offers the $130 Force with similar features and a slightly larger OLED panel and especially long battery life: 11 days, according to our tests. Unfortunately, the software experience for Fitbit's devices is cumbersome to use, and also lacking in certain areas. Then again, food tracking -- the area where Fitbit is particularly weak -- is not a strong suit for Jawbone either.

Then there's Nike's $150 FuelBand SE. Though it has a similarly sleek design as its predecessor, and also works the same way, it houses a larger battery that only needs charging once a week. It also brings improved social networking integration, if you find that helpful for keeping your workouts on track. Still, we found the new software features like Sessions to be rather hit or miss. Oh, and there's still no Android app, with no sign of one arriving anytime soon. After some quality time with the Up24, I can definitely say that this is Jawbone's best activity tracker yet. Sure, the software still needs some polish, and the sleep-tracking feature can still be imprecise, but we're excited about the possibility for even more integration with third-party apps. It is worth noting that the Up24 is also the company's most expensive fitness device to date and sits just on the upper end of what we'd be willing to pay for such a device. And don't forget that last year's Up is still available for $130. Even so, we'd recommend shelling out the extra 20 bucks for the convenience of Bluetooth connectivity. Because let's face it: Taking the unit off to sync every day means you might not be using it at all a few months down the road.