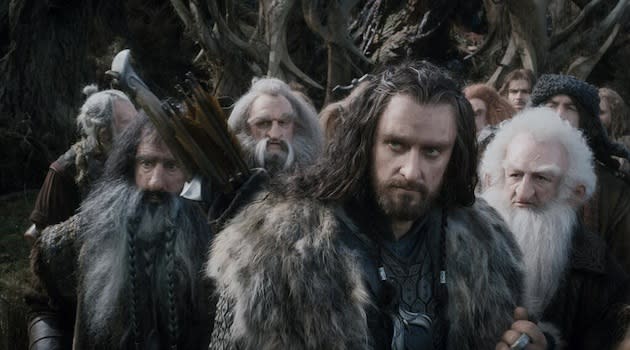 The first Hobbit movie served as a debut for 48fps "high frame rate" movies, and found a cool reception from critics and many fans. This time around, as The Hobbit: The Desolation of Smaug hits theaters, director Peter Jackson is doubling down on the rhetoric, claiming that an improved HFR is the best way to see the movie. Quoted by Variety, Jackson repeated claims that this new process improves the quality of 3D, and says he experimented with a different approach to color grading that takes away from the HD-ish look many disliked the first time around. The second Hobbit movie has HFR screenings at 812 screens, nearly double the last year's number. This time around press and critics saw the film in 24fps, instead of 48fps, but the various premieres did feature HFR showings. By now some of you have either seen the movie or are going to a screening this weekend, let us know if you picked the super-smooth 48fps showing or stuck with old school 24fps projection.

In this article: 48fps, hdpostcross, hfr, peterjackson, TheHobbit, TheHobbit:TheDesolationOfSmaug
All products recommended by Engadget are selected by our editorial team, independent of our parent company. Some of our stories include affiliate links. If you buy something through one of these links, we may earn an affiliate commission.